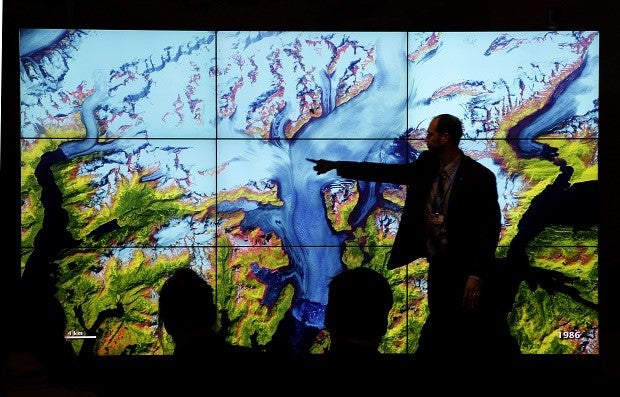 People attend a climate conference at the US pavilion during the COP21, United Nations Climate Change Conference in Le Bourget, north of Paris, Thursday, Dec. 10, 2015. AP

LE BOURGET, France — French Foreign Minister Laurent Fabius on Thursday presented a new draft of a global climate accord that showed headway on some key issues and stalemate on others as the talks outside Paris headed into the final stretch.

The draft also said governments would aim to peak the emissions of heat-trapping greenhouse gases “as soon as possible” and strive to reach “emissions neutrality” by the second half of the century.

That was weaker language than in previous drafts that included more specific emissions cuts and timeframes. Emissions neutrality wasn’t defined in the text. Previous versions have included similar terms that are generally understood to mean no more emissions than the Earth can naturally absorb.

The issue appeared far from settled, however, with one negotiator from a developed country saying his delegation would “push back” on the long-term goal. He spoke on condition of anonymity because the talks were ongoing.

Fabius, who is leading the talks, told negotiators to review the draft and come back in two hours to continue the talks. The Paris conference was scheduled to end on Friday, but the annual UN talks rarely finish on time.

“I think, I hope that by the end of this night we’ll have a draft of the final text,” Fabius said. “We are much closer.”

Diplomats from 196 governments are trying to forge a global pact in Paris to slow global warming by collectively slashing emissions, mostly from the burning oil, coal and gas for energy.

The biggest challenge is to define the responsibilities of wealthy nations, which have polluted the most historically, and developing economies including China and India where emissions are growing the fastest.

That draft suggested compromises were emerging in some sections. But the text still contained competing options on the key issue of transparency — making sure countries follow through on their emissions targets.

That section included an option asking for different rules for rich and poor countries, which the former have said is unacceptable.

“Reporting and verification of emissions is the heart of a strong agreement and will clearly be the last thing decided,” said Paul Bledsoe, former Clinton White House climate adviser.

More than 180 countries presented plans to cut or curb their emissions before the conference, and negotiators are discussing ways to anchor those pledges in the agreement.

Several options remained on the contentious issue of financing to help poor and vulnerable countries such as small island nations cope with climate change. Western countries want advanced developing economies such as China and oil-rich Arab countries to pitch in. The new draft said other countries could join the donor base “on a voluntary, complementary basis.”

The draft didn’t resolve how to deal with demands from vulnerable countries to deal with unavoidable damage from rising seas and other climate impacts. One option said such “loss and other damage” would be addressed in a way that doesn’t involve liability and compensation — a US demand.

Some environmental advocates rejected the draft as too weak to make a real difference in fighting climate change while other said important progress was made.

“Of course differences remain, but it’s clear that the countries here are very, very serious about the challenge before them,” said Nat Keohane of the Environmental Defense Fund. “There is strong momentum as we head to the finish line.”

Swedish Environment Minister Asa Romson said the draft was “cleaner” than previous versions and a step forward for the negotiations.

READ: PH to battle it out for climate goals

The talks have previously been guided by a goal to limit warming to 2 degrees C, compared with preindustrial times. Small island nations at risk of being inundated by rising seas have been pushing for lowering that goal to below 1.5 degrees C in the Paris agreement. Temperatures have already risen by 1 C (1.8 F) since the 19th century, when Western nations started to industrialize and burning fossil fuels on a large scale.

Marshall Islands Foreign Minister Tony de Brum was satisfied that the 1.5 degree target was reflected in the draft.

“With this, I would be able to go home and tell my people that our chance for survival is not lost,” he said.

However, scientific analyses show the emissions targets that more than 180 countries have presented won’t be enough to limit warming even to 2 degrees C. The draft invited governments to “update” their emissions targets every five years, but didn’t require them to improve them.

US Secretary of State John Kerry held meetings Thursday with top officials from two major developing nations — Brazil and India — and other negotiators. The Obama administration is working for a deal that reflects its concerns about global warming but doesn’t require approval from a skeptical Congress.