PARIS — Aurora, Greenpeace’s giant polar bear, is at it again. After standing guard in London during protests against Arctic drilling, she is now in this city holding vigil for this year’s crucial climate change negotiations.

Greenpeace unveiled the mechanized bear at the Le Bourget convention centre on Wednesday as the group called attention to the rights of indigenous peoples amid worsening effects of climate change.

Kumi Naidoo, executive director of Greenpeace, said they are hoping that the negotiations at the 21st Conference of Parties (COP21) will not stall.

“Ministers have to bring ambition to the long term goal, so that we have full decarbonisation by 2050, and financial support for the most vulnerable,” he said.

With Aurora as his backdrop, Naidoo called for the protection of the rights of indigenous peoples, who are at the “frontline of the growing climate crisis.”

He said that a large number of the environmental activists being killed are indigenous peoples.

“Every week, two environmental activists are being killed. And if you look who are these activists they are disproportionately indigenous peoples and people who are (in) forest-dependent communities,” he pointed out.

Naidoo said this is the reason why the rights of indigenous peoples should be enshrined in the legally binding agreement that is set to be signed at the end of the conference.

“We must come together to protect the people who are suffering first and most brutally from the impacts of climate change around the world.  This means the rights of Indigenous Peoples to be upheld which is why Greenpeace supports its specific inclusion,” Naidoo said, referring to the draft agreement.

“When this polar bear roars, she roars for billions of people, and she roars loudest for those on the frontlines of climate change,” Naidoo said, referring to the giant polar bear. 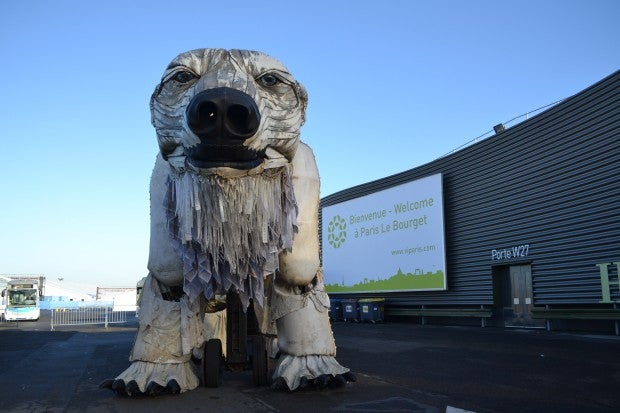