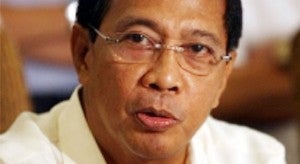 “The best social equalizer is education,” said Binay in a forum with about 2,000 students of the Negros Oriental State University (NORSU), the lone state university of the province with a student population of about 30,000.

He cited the case of the University of Makati (UMak), which has been getting subsidies from the Makati City government and has been operating on an annual budget of P500 million.

Binay said that when he started working as mayor in 1986, the then  Makati Polytechnic Community College did not even have a library yet.

He said he fixed the college, which later became a university now known as UMak.

Binay said UMak graduates were all employed due to the continued dialogue between the city government and the private sector on their employment needs.

Binay pointed out that employers have been looking for the educated and the skilled. “Maraming subjects ang hindi na kailangan, sa aming pananaw (We think that there are  subjects that are not necessary anymore). We need to train [the students’] skills,” he said, adding that UMak has become the model for the skill-oriented K-12 system.

“You should not stop studying. Learning must be a continuous process. There is no room for mediocrity today. You must be outstanding,” Binay reminded students.

The Vice President was on a four-day sortie in Negros Oriental that ended on Thursday.

Before flying back to Manila at 10:30 a.m., he first dropped by NORSU to interact with the students.

During the forum, Binay received the loudest applause when he said  he would see to it that free wifi would be available in the country if elected president.

His dream, he added, would be to have every household owning a computer.

Binay added that Makati has provided computers for their grade schools and colleges.

“And we have benefited from it,” he said, reminding students that the country had to compete with other countries.

During the open forum, a student asked Binay about his accomplishments – not as Makati mayor, but as vice president.

Before answering the question, Binay pointed out that no law defined the job description of a vice president.

Still, he added, he has been a “working vice president” when he was chair of the  National Housing Authority, which successfully implemented socialized housing in the country and Pag-IBIG, which became the most outstanding government agency during his time.

“I am proud to say that I have performed these jobs well,” Binay added.

He also encouraged students to study his track record and to make sure to exercise their right to vote in the coming elections. “This is how you participate in the running of the government,” Binay said.  SFM