The Philippine delegation to the 21st Conference of Parties (COP21) in Paris, France, is hard at work as the climate talks enter the final stretch. Picture fifth and sixth from left are Secretary Manny de Guzman and Dean Tony La Viña, head and spokesperson of the country’s delegation, respectively. PHOTO BY KRISTINE SABILLO/INQUIRER.NET

PARIS – The Philippine delegation fully opened its doors to media, civil society and other stakeholders on Dec. 9, 2015, as the 21st Conference of Parties (COP21) in Paris, France, entered the final stretch of negotiations seeking to lessen the effects of climate change.

“We’re opening up all our meetings now to media and Philippine NGOs (nongovernment organizations) so that there is transparency in our process all the way to the end,” Dean Tony La Viña, spokesperson of the Philippine delegation, told a room packed with negotiators, observers, media and other stakeholders.

The small conference room is one of two meeting areas where the country’s delegation has been meeting to discuss the developments of the climate talks. In recent days, it is not uncommon for the rooms to be teeming with representatives from other countries and NGOs interested in connecting with the Philippines, which has taken on a more active role in the negotiations as current chair of the Climate Vulnerable Forum.

At the hourlong meeting, negotiators and observers weighed in on the newest draft agreement, earlier released at 3 p.m. Paris time (10 p.m. Philippine time). Down to 14 pages from the 21-page version drafted four days ago, the Paris committee in charge of consolidating inputs from the 195 parties is expected finish the final draft on Dec. 11, 2015.

Topics raised during the meeting included the Philippines’ stance on bracketed items related to mitigation, adaptation and climate financing. 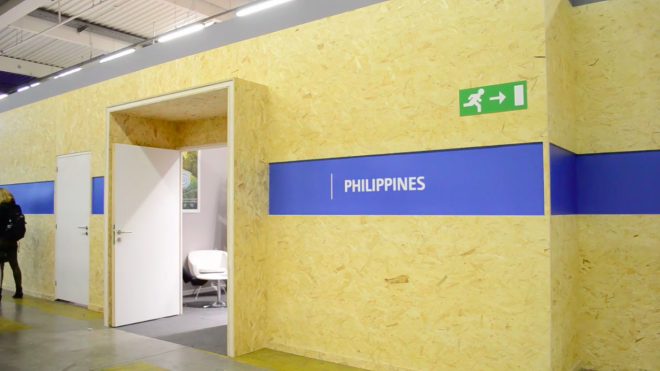 Entrance of the rooms occupied by the Philippine delegation to COP21 in Paris, France. PHOTO BY KRISTINE SABILLO/INQUIRER.NET

Secretary Manny de Guzman, vice chair of the Climate Change Commission and head of the country’s delegation to COP21, also boosted the morale of the Philippine team and encouraged those present to keep pushing for an agreement for the sake of developing countries, who are especially vulnerable to climate change.

“We are very close already to having an agreement. And this agreement is very important for us because Philippines is looked up to as a leader of the vulnerable countries,” De Guzman said. “That’s why we’re putting all our efforts here to come up with a really good arrangement with other countries.”

“We hope that this agreement, this climate action will be really turbo-charged to the benefit of developing countries, especially the vulnerable countries, vulnerable to climate change,” he added.

COP21 aims to ink a legally binding agreement to reduce greenhouse gas emissions. The Philippines, in its capacity as current chair of the Climate Vulnerable Forum, has been pushing to include human rights and a 1.5 degrees Celsius goal in the final agreement.

PH: Where is adaptation finance in climate pact?