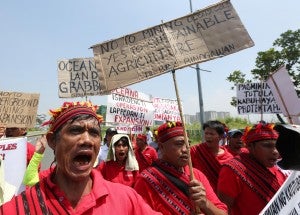 September 15, 2015
In a protest at the Chamber of Mines conference in Pasay City, lumads from Mindanao  claim that the ongoing military operations in provinces like Surigao del Sur are meant to facilitate the entry of big mining companies in  areas occupied by indigenous communities.  INQUIRER/ MARIANNE BERMUDEZ

DAVAO CITY, Philippines – Governor Johnny Pimentel of Surigao del Sur has called on government agencies to help feed the almost 3,000 evacuees who have been staying at the province’s sport complex for more than three months now.

“They will not go home because their homes are still not safe,” Pimentel told the Philippine Daily Inquirer by phone.

He said food donations have started to dwindle, and that feeding the evacuees have become a  problem for the provincial government.

The evacuees left their homes on Sept. 1 after members of the paramilitary group Magahat-Bagani swooped down on the hinterland sitio (settlement) of Han-ayan in the barangay (village) of Diatagon in Lianga town and killed Emerito Samarca, executive director of the Alternative Learning Center for Agriculture and Development (Alcadev), and lumad leaders Dionel Campos and Datu Bello Sinzo.

The paramilitary men accused residents of Han-ayan of being supporters of the communist New People’s Army.

Pimentel said the evacuees were starting to go home but opted to remain in the evacuation center after armed men believed to be members of the Magahat-Bagani killed a farmer in San Miguel town on Nov. 12.

Killed was Orlando Rabuca, the vice chair of a farmers’ group in the town.

Witnesses said one of the armed men who killed Rabuca was Garito Layno, one of the Magahat-Bagani leaders who were also tagged in the killings in Sitio Han-ayan on Sept. 1.

The local court has issued warrants of arrest against Layno and brothers Loloy and Bobby Tejero, who were identified as those who led the Sept. 1 killings in Lianga.

Pimentel said the Tejero brothers were frequently seen at the town center in Lianga, but the police and military have not arrested them.

“How can the evacuees return to their homes if these suspects freely roam the areas?” the governor asked.

Pimentel has repeatedly called on the police and military to arrest the suspects in the Sept. 1 killings, and the disarming and disbandment of the Magahat-Bagani.

Armed Forces Chief of Staff Hernando Irriberi earlier denied that the military was not doing anything against those linked to the killings in Surigao del Sur.

Irriberi also admitted that Samarca, one of the victims in the Sept. 1 killings, was a relative.

“His father is my second cousin. If there is one person who wants peace and who wants justice for his death, that’s me,” he said in an interview in Zamboanga City.

He said the military – in coordination with the Philippine National Police – has been running after the suspects.

He also denied allegations of militarization of lumad areas, particularly in Surigao.

“These are accusations. The mandate of the AFP is very clear and that is to protect our people. Whenever we enter any area under our responsibility, foremost in our mind is the protection of our people and we do that for peacekeeping. It is not to militarize the area but our purpose there is peacekeeping,” Irriberi added.

Jojo Samarca, a son of the slain Alcadev director, confirmed that Iriberri was a relative.

But he said this did not spare them from harassment.

“We receive death threats. My elder brother (Karl) called up informing me that there were men from the 42nd Infantry Battalion (based in Cabadbaran City) who keep on coming to our house; looking and demanding for the whereabouts of my mother (Yosie),” he said.

“I appeal to my cousin, Iriberri, to tell his men to stop this harassment and to give justice to the death of my father and all the lumad victims of extrajudicial killings,” he added.

The young Samarca also called for the withdrawal of all soldiers from lumad areas and the disbandment of all paramilitary groups in the province.

“Allow them (lumad) to freely return to their homes,” he said.  SFM