Binay unfazed by Duterte lead in survey, vows to reduce poverty in PH 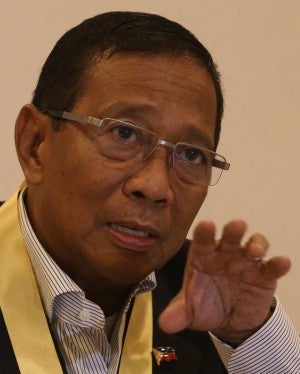 He vowed that his administration would prioritize poverty alleviation and uplifting the lives of Filipinos, particularly in Negros Oriental, considered the poorest province in Central Visayas.

He also promised to continue the cash doleout program of the government for poor families — the Pantawid Pamilyang Pilipino Program (4Ps) — and improve it to ensure better and efficient services as well as provide financial assistance to the senior citizens like what he did in Makati City.

Negros Oriental has a poverty incidence of 43.9 percent, according to the National Anti-Poverty Commission.

Binay and the senatorial candidates of the United Nationalist Alliance (UNA) arrived in Bacong town before noon on Monday and  Ong Che Tee Bacong High School.

His visit to Negros Oriental came a day after the release of the SWS survey that ranked him second in the survey. He tied with Senator Grace Poe at 21 percent.

But Binay appeared unperturbed and went on attacking the administration in his speech in Bacong and Zamboanguita.

“Nakakalungkot na kahit sinasabi ng administrasyon na gumaganda ang ekonomiya, hindi ito ramdam ng karamihan sa ating mga kababayan (It is sad that even if this administration claims that the economy is doing well, it is not felt by many Filipinos),” Binay said.

“In the present administration, the rich became richer and the poor became poorer. What’s good in that?” he asked.

He said  poverty, unemployment and  hunger would be the issues that should be discussed during the elections.

Binay expressed confidence he could address these issues when elected president.

He pointed out that when he took over as Makati mayor, the city was bankrupt. But under his administration, he said the city grew economically, eventually attaining a budget of P11 billion.

“Now that is good governance,” he said.

Aside from continuing the 4Ps program, Binay stressed the importance of government investments in social services like education, housing and health.

Focus should also be on job generating sectors like agriculture, tourism, manufacturing, among others to provide decent jobs to Filipinos.

In Zamboanguita, he told a crowd of senior citizens that they should go to Makati City to see how the elderly were valued there.

He will join the celebration of the Kasadyaan Festival at the Foundation University in Dumaguete.

On Thursday, he will visit the Negros Oriental State University.  SFM