More US police charged with murder or manslaughter in 2015 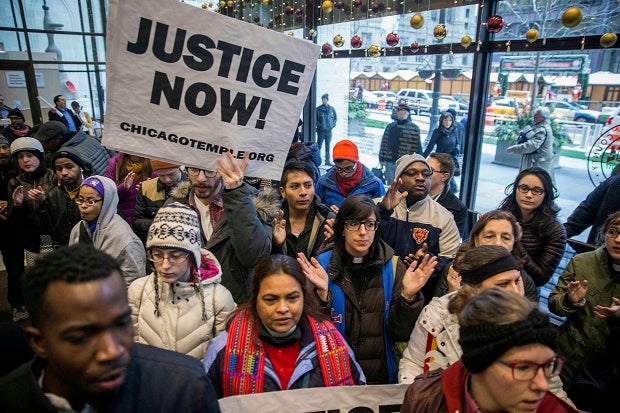 Clergy, labor leaders and supporters gather at the Cook County Administration Building Thursday, Dec. 3, 2015, in Chicago to demand the resignation of Cook County State’s Attorney Anita Alvarez before delivering 32,000 petition signatures calling for her to quit. The long wait to file charges against a white Chicago police officer who fatally shot a black teenager has provoked sharp criticism of the city’s top prosecutor.
RICH HEIN/CHICAGO SUN-TIMES VIA AP

CHICAGO — The number of US police officers charged with murder or manslaughter for on-duty shootings has tripled this year, a sharp increase that at least one expert says could be the result of more video evidence.

In the past, the annual average was fewer than five officers charged. In the final weeks of 2015, that number has climbed to 15, with 10 of the cases involving videos.

“If you take the cases with the video away, you are left with what we would expect to see over the past 10 years — about five cases,” said Philip Stinson, the Bowling Green State University criminologist who compiled the statistics from across the nation. “You have to wonder if there would have been charges if there wasn’t video evidence.”

The importance of video was highlighted last week with the release of footage showing a Chicago officer fatally shooting a teenager 16 times. The officer said he feared for his life from the teen, who was suspected of damaging cars using a small knife. He also had a powerful hallucinogen in his bloodstream.

“This had all the trappings of a life-threatening situation for a law-enforcement officer — PCP-laced juvenile who had been wreaking havoc on cars with a knife,” said Joseph Tacopina, a prominent New York defense attorney and former prosecutor who has represented several police officers. “Except you have the video that shows a straight-out execution.”

When he was charged with first-degree murder last week, officer Jason Van Dyke became the 15th officer in the country to face such charges in 2015.

Over the last decade, law-enforcement agencies have recorded roughly 1,000 fatal shootings each year by on-duty police. An average of fewer than five each year resulted in murder or manslaughter charges against officers, Stinson found.

Of the 47 officers charged from the beginning of 2005 through the end of last year, about 23 percent were convicted, Stinson found.

“For forever, police have owned the narrative of what happened between any encounter between a police officer and a civilian,” said David A. Harris, a University of Pittsburg law professor who has written extensively on police misconduct. “What video does is it takes that power of the narrative away from the police to some extent. And that shift in power of control over the narrative is incredibly significant.”

In case after case, that is exactly what has happened this year.

Just how dramatically a video can shift the balance of power was apparent in North Charleston, South Carolina, when officer Michael Slager shot and killed Walter Scott, an unarmed black man as he ran away after a traffic stop.

Slager told investigators that Scott had tried to grab his gun and Taser. But after a video from a cellphone showed Slager taking careful aim at Scott as he ran away and then picking up his Taser and dropping it near Scott’s body, Slager was charged with murder.

“If not for the recording, I have no doubt that the officer in the Walter Scott case would be out on patrol today,” Harris said.

Videos have also played a key role in cases in which the victims were, in fact, armed — something that Tacopina said typically brings to a halt any thought of charging officers.