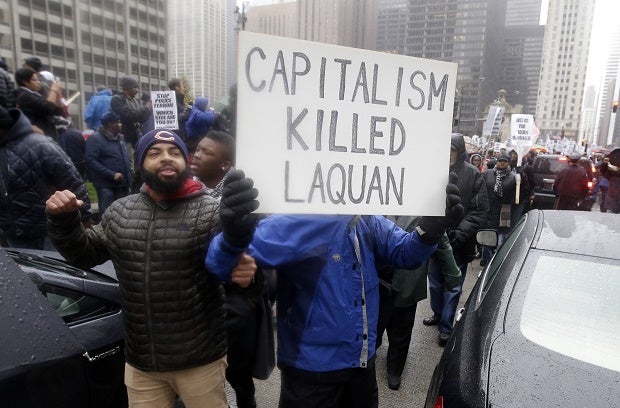 Protesters make their way up North Michigan Avenue on Friday, Nov. 27, 2015, in Chicago. Community activists and labor leaders hold a demonstration billed as a “march for justice” in the wake of the release of video showing an officer fatally shooting Laquan McDonald. AP Photo

CHICAGO, United States—Thousands of protesters blocked traffic and barred shoppers from entering stores during the Black Friday sales extravaganza to demand justice for a black teen killed by a Chicago police officer.

Tensions flared in this Midwestern city after officials released a dashcam video on Tuesday showing officer Jason Van Dyke shot Laquan McDonald 16 times after the teenager walked away from him in October 2014.

The graphic video is the latest in a string of police shootings caught on camera that have sparked mass—and sometimes violent—protests and engulfed the United States in a debate over racism and the use of deadly force by police.

“All they think we’re going to do is grow up to be thugs,” Jared Steverson, 27, shouted at a black police officer who stood guard outside a shop on the city’s upscale “Magnificent Mile” shopping strip.

“It wasn’t about him fearing for his life, it was him not wanting to see that boy live.”

The black officer stood stone-faced and avoided Steverson’s gaze as he stood inches (centimeters) away, swearing and waving his hands as he accused the officer of guarding the wrong neighborhood and betraying his race.

“When you go home and put on clothes like me, you’re black and they’re going to pull you over because you’re just like me,” Steverson shouted.

He stepped away, and wiped tears from his eyes.

“I’ve lost too many little brothers,” he told AFP, then turned back to the police and said “I’m not a thug. I don’t sell drugs. I went to college. You all ain’t got to treat us like dogs, man.”

‘No one cares, clearly’

Prosecutors and city officials have come under fire for waiting until a judge ordered the release of the video to charge Van Dyke with murder.

Several protesters held signs demanding the resignation of Chicago’s embattled police chief and chanted “16 shots 13 months” to voice anger that it took so long to charge Van Dyke when there was clear evidence he was never threatened by McDonald.

Police had initially said that McDonald, who was high on PCP, lunged at Van Dyke while brandishing a knife.

Protesters say the shooting illustrates deeper injustices both in Chicago and nationwide.

Many liken McDonald’s case to that of Michael Brown, the black teenager shot dead by a white policeman in Ferguson, Missouri last year.

Samantha Vazquez, 18, joined those locking their arms in front of stores to block shoppers from the high-end shops on Michigan Avenue.

She wanted to stand up for McDonald because she feels like it could have been her or one of her friends shot 16 times and left to bleed out alone on the pavement.

“We’re going to hold down these doors so nobody can buy anything, so nobody makes money until people understand how bad this is, how this is affecting Chicago,” Vazquez told AFP as she stood outside Cole Haan.

“No one cares, clearly, they’re just walking by shopping. And no one cares that somebody’s dead, that other kids have been shot and nobody’s doing anything.”

Okunola Jeyifous and his wife Megan brought their nine-month-old twins to the demonstration, braving freezing rain.

Jeyifous, 41, is a research scientist at the University of Chicago. He said he feels that the color of his skin means he cannot trust the police. And he worries that his children could end up dying on the street one day.

“This is an important moment,” he told AFP.

“I want them to live in a world and live in a society that values them and in which they feel they have equal protection under the law.”