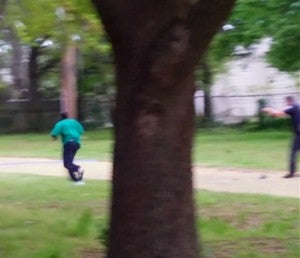 In this April 4, 2015, frame from video provided by Attorney L. Chris Stewart representing the family of Walter Lamer Scott, Scott appears to be running away from City Patrolman Michael Thomas Slager, right, in North Charleston, S.C. Slager was charged with murder Tuesday, hours after law enforcement officials viewed the dramatic video that appears to show Slager shooting a fleeing Scott several times in the back. AP/Courtesy of L. Chris Stewart

WASHINGTON, United States – Police in the US state of South Carolina charged an officer Tuesday with murder after video showed him apparently gunning down a fleeing black man, the latest in a string of shootings of unarmed black men that have raised allegations of police racism.

South Carolina state police arrested officer Michael Slager and charged him with murder, a felony that carries a sentence of up to life in prison or the death penalty, according to a news release.

Slager’s arrest comes after video surfaced of the shooting that killed 50-year-old Walter Scott Saturday. The video seems to show Slager in an altercation with Scott and then draw his gun and shoot seven to eight shots in Scott’s back as Scott fled.

The officer then approaches Scott laying on the ground telling him to put his hands behind his back, and Slager puts him in handcuffs, the video shows. Slager then appears to get a device that had fallen during the altercation and drop it by Scott’s body.

The incident was prompted by a traffic stop due to a broken tail light, local media reported.

The city’s mayor Keith Summey said the charge was prompted by the video, local newspaper The Post and Courier reported.

South Carolina police told AFP they could not comment on the case as the investigation is ongoing.

“We are continuing to work on the investigation,” said Thom Berry from the South Carolina Law Enforcement Division.

A number of killings of unarmed black men by white police officers in recent months have sparked protests across the United States with protesters alleging racism in the nation’s police and raised accusations that officers use excessive force.

Officers have rarely been charged in the shootings, even when the incidents were recorded.

The killing of unarmed black teen Michael Brown was a catalyst for a recent surge in protests in the country. A jury in November chose not to indict a Ferguson, Missouri, police officer for the shooting.

The US Justice Department has launched investigations into a number of police departments after shootings and unearthed damning evidence that officers in Ferguson targeted black residents.