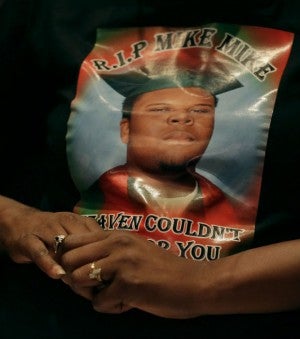 A woman listens during a rally at Greater Grace Church, Sunday, Aug. 17, 2014, for Michael Brown Jr., who was killed by police, last Saturday in Ferguson, Mo. AP

AUG. 9 — Brown and a companion are confronted by an officer as they walk back to Brown’s home from a convenience store. Brown and the officer are involved in some kind of scuffle, followed by gunshots. Brown dies at the scene.

AUG. 10 — After a candlelight vigil, people protesting Brown’s death smash car windows and carry away armloads of looted goods from stores. In the first of several nights of violence, looters are seen making off with bags of food, toilet paper and alcohol. Some protesters stand atop police cars and taunt officers.

AUG. 11 — The FBI opens an investigation into Brown’s death, and two men who said they saw the shooting tell reporters that Brown had his hands raised when the officer approached with his weapon and fired repeatedly. That night, police in riot gear fire tear gas and rubber bullets to try to disperse a crowd.

AUG. 12 — Ferguson Police Chief Tom Jackson cancels plans to release the name of the officer who shot Brown, citing death threats against the police department and City Hall. The Rev. Al Sharpton and President Barack Obama both plead for calm after two nights of clashes between police and protesters.

AUG. 13 — Another night of violence wracks Ferguson, with some people lobbing Molotov cocktails and other objects at police, who respond with smoke bombs and tear gas. Two reporters are detained at a McDonald’s. Images of the standoff, showing police using armored vehicles and pointing assault rifles at the crowds, are widely shared on social media.

AUG. 14 — The Missouri Highway Patrol takes control of security in Ferguson, relieving local police of their law-enforcement authority after four days of violence. Within hours, the mood among protesters becomes lighter, even festive. The streets are filled with music, free food and even laughter.

AUG. 15 — Police identify the officer who shot Brown as Darren Wilson, a 28-year-old man who had patrolled the St. Louis suburbs for six years. They also release a video purporting to show Brown robbing a convenience store of almost $50 worth of cigars shortly before he was killed. The video draws anger from protesters. After nightfall, officers and the crowds clash again. Some people in the crowd storm into the same convenience store that Brown was accused of robbing and loot it.

AUG. 16 — Missouri Gov. Jay Nixon declares a state of emergency and imposes a curfew in Ferguson. The first night of the curfew ends with tear gas and seven arrests, after police in riot gear use armored vehicles to disperse defiant protesters who refused to leave.

AUG. 17— Attorney General Eric Holder orders a federal medical examiner to perform another autopsy on Brown. The Justice Department cites the “extraordinary circumstances” surrounding the death and a request by Brown’s family members.