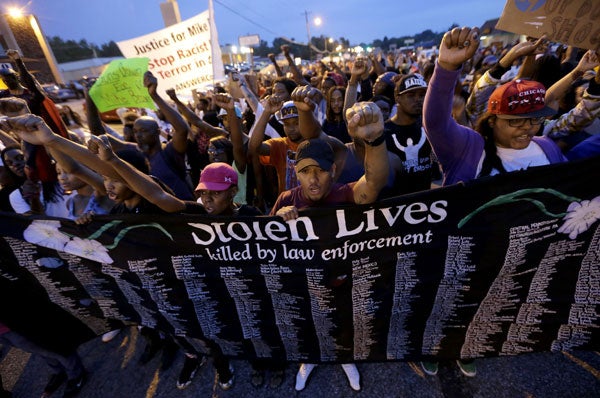 FERGUSON, Missouri— Police on Sunday fired multiple smoke canisters into a crowd of defiant protesters in a suburb to the US city St. Louis where a black teen had been shot by a white police officer while walking down the street.

Hundreds of other protesters left peacefully before the midnight to 5 a.m. deadline took effect in Ferguson, Missouri.

But remaining protesters — chanting “No justice! No curfew!” — refused to leave the area. As five armored tactical vehicles approached the crowd, officers spoke through a loudspeaker: “You are in violation of a state-imposed curfew. You must disperse immediately. Failure to comply may result in arrest.”

As officers put on gas masks, a chant from the distant crowd emerged: “We have the right to assemble peacefully.”

A moment later, police began firing smoke into the crowd of protesters.

Gov. Jay Nixon on Saturday declared a state of emergency in Ferguson — the site where 18-year-old Michael Brown was killed by a police officer.

The curfew announcement came after tensions again flared late Friday. Earlier that day, local police identified the officer who shot Brown as Darren Wilson and released documents and video footage alleging that Brown had robbed a convenience store just before he was shot. Police said Wilson was unaware Brown was a suspect when he encountered him walking in the street with a friend.

Nixon said the U.S. Department of Justice is widening its civil rights investigation of the shooting.

Missouri State Highway Patrol Capt. Ron Johnson, who is in charge of security in Ferguson, said 40 FBI agents were going door-to-door in the neighborhood starting Saturday, talking to people who might have seen or have information about the shooting.

Brown’s death ignited several days of clashes with furious protesters. Local officers faced strong criticism for their use of tear gas and rubber bullets against protesters. Tensions eased Thursday after Nixon turned oversight of the protests over to the Missouri Highway Patrol. Gone were the police in riot gear and armored vehicles. But Friday night marked a resurgence of unrest.

Crowds that were in the hundreds prior to the curfew dwindled significantly in the final hour early Sunday, as police with riot gear stood guard.

As the curfew approached, New Black Panther Party leader Malik Shabazz roamed the street with a bullhorn, encouraging people to leave for their own safety. Many appeared to follow his suggestion.

In announcing the curfew, Nixon said that though many protesters were making themselves heard peacefully, the state would not allow looters to endanger the community.

“We must first have and maintain peace. This is a test. The eyes of the world are watching,” Nixon said. “We cannot allow the ill will of the few to undermine the good will of the many.”

State statute gives the governor broad powers when he declares a state of emergency, but he hasn’t indicated that he plans to do anything other than imposing the curfew and empowering the state highway patrol to enforce it.

“I think it’s an antagonistic decision to not allow people to express their freedom of speech. It’s an overreaction,” he said.

On Saturday, some residents said it appeared the violent acts were being committed by people who came from other suburbs or states.

“Who would burn down their own backyard?” asked Rebecca McCloud. “These people aren’t from here. They came to burn down our city and leave.”

Wilson, the officer who shot Brown, is a six-year police veteran who had no previous complaints against him, the local police chief has said.

The Ferguson Police Department has refused to say anything about Wilson’s whereabouts, and Associated Press reporters were unable to contact him at any addresses or phone numbers listed under that name in the St. Louis area.

Wilson has been on paid administrative leave since the shooting. St. Louis County prosecutor Bob McCulloch said it could be weeks before the investigation wraps up.