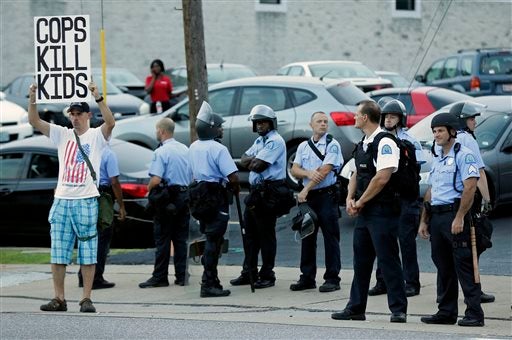 In this Saturday, Aug. 16, 2014, file photo, a man holds a sign in front of a group of police officers to protest the shooting death of Michael Brown, an unarmed black teenager, by a white police officer a week earlier in Ferguson, Missouri. Fresh violence in the riot-hit US town left one person shot and seven people arrested Sunday as authorities ordered a second autopsy on slain teenager. AP PHOTO/CHARLIE RIEDEL

FERGUSON, Missouri–Fresh violence in the riot-hit US town of Ferguson left one person shot and seven people arrested Sunday as authorities ordered a second autopsy on an unarmed black teenager gunned down by police.

Police in the St Louis suburb used smoke bombs and tear gas to disperse demonstrators, while in a separate incident a woman was left fighting for her life after being shot.

Local media reported that the curfew ordered by Missouri Governor Jay Nixon would remain in place for a second night Sunday, potentially setting the stage for further confrontations.

In a separate development, the US Justice Department announced that a federal medical examiner would carry out a second autopsy on Brown’s body. A first one has already been performed.

Justice Department spokesman Brian Fallon said the second autopsy had been ordered by Attorney General Eric Holder because of the case’s “extraordinary circumstances.”

News of the second autopsy was cheered by civil rights leaders, including NAACP president Cornell Brooks, who called the decision “very encouraging.”

People “want to know that there are people in the White House who are listening to them, because they don’t trust local authorities,” he told CBS television’s “Face the Nation.”

Brown’s death at the hands of a white police officer has reignited a national debate about law enforcement and African-Americans.

Saturday night’s clashes began when riot police moved to break up crowd of protesters who had gathered near where Brown was killed.

Missouri Highway Patrol Captain Ron Johnson, the African American officer Nixon put in charge of restoring peace in Ferguson, said police acted after receiving reports of a shooting and that armed individuals had broken into a restaurant.

Seven people were arrested for failing to disperse.

Johnson acknowledged the toll the violence has taken on him.

“Yesterday was the first day that I cried,” he told a news conference.

“Last night, I got tired. I got scared, but… we’re going to be all right.

‘Ready for a fight’

Antonio French, an area politician who was with the protesters when police moved in, wrote that some were ready for violence.

“I can tell you firsthand that some of the people that remained tonight were armed. Were ready for a fight. And wanted to injure police,” he wrote on Twitter.

“It’s important to differentiate the protesters from those violent opportunists that are not thinking about #MikeBrown or justice. #Ferguson.”

Brown’s family has accused authorities of a “devious” attempt to smear their son’s character after police named him as a suspect in the robbery of a Ferguson convenience store and released a surveillance video of the incident.

Police said the officer, unaware of the robbery, stopped the teen merely for walking in the middle of the street.

The video’s release sparked widespread criticism, with even Nixon saying he was unaware ahead of time and “unhappy” when it came out.

“It appeared to, you know, cast aspersions on a young man that was gunned down in the street,” he said on ABC’s “This Week,” blaming the move for sparking violence Friday night after a first night of calm on Thursday.

“It made emotions very raw.”

The Justice Department, which is conducting a separate investigation into the shooting, had urged the Ferguson police not to release the video, The New York Times reported, citing a federal law enforcement official.–Loic Hofstedt