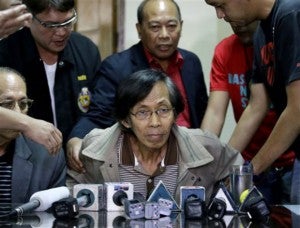 Only one of two people caught with retired Army Maj. Gen. Jovito Palparan (pictured) in his hideout in Sta. Mesa, Manila, on Tuesday will be charged with harboring a fugitive and obstruction of justice, according to a source from the National Bureau of Investigation. AP FILE PHOTO

CITY OF SAN FERNANDO, Philippines—The Armed Forces of the Philippines (AFP) is not leaving retired Maj. Gen. Jovito Palparan to fend for himself, even as the military’s naval unit, together with the National Bureau of Investigation (NBI), arrested him last week in connection with the 2006 kidnapping of two University of the Philippines students.

“The AFP is not abandoning retired General Palparan. Without violating regulations, we are willing to provide all the help he needs in terms of security,” AFP Chief of Staff Gen. Gregorio Pio Catapang told the Inquirer on Sunday.

Catapang was reacting to a statement that said Palparan, who was arrested in Sta. Mesa, Manila, on Aug. 12, reportedly told an NBI official that he had lost trust in the military leadership to protect his rights.

Palparan had been on the run for more than three years after a Bulacan court issued a warrant for his arrest for the kidnapping and serious illegal detention of UP students Sherlyn Cadapan and Karen Empeño in Hagonoy town in June 2006.

Palparan, a counterinsurgency expert who represented the party-list Bantay in Congress after he retired from the military, declined to name the AFP officers he did not trust.

Palparan earlier said he never received support from the AFP, denying that he had used a house in Camp Aguinaldo as a hideout.

Catapang said the AFP would provide additional security to Palparan or his family if his lawyers request it.

Asked why the military should help in securing the retired officer, Catapang said: “The alleged crime happened when he was in active service and he’s innocent until proven otherwise.”

Palparan, Catapang said, has not received his retirement and pension benefits pending the resolution of the cases against him.

While the Malolos Regional Trial Court has ordered his transfer to the Bulacan Provincial Jail, Palparan through his lawyers asked to remain under NBI custody, claiming a hit squad of the New People’s Army was out to kill him.

Sen. Antonio Trillanes IV, however, said that Palparan should be detained in a military facility instead of a regular jail for his own security.

Trillanes said the AFP must also ensure his protection or risk demoralizing its ranks.

“This effort does not mean to absolve General Palparan of the charges he is facing and I am also sure that the AFP will not intervene in the legal processes. We are only aiming to ensure that he is protected from any acts of retribution while he is in detention,” he said in a statement.

Trillanes, a former Navy officer, said putting Palparan in a military facility would be the proper move since the case against him was in relation to his work as an officer of the AFP.

He made the call after visiting Palparan at the NBI.

“We were informed of the existing threats to the life of General Palparan. To make sure that he is secure, it would be best that he is transferred to a detention facility of the AFP. This is also proper since the alleged crimes he committed were related to his functions as a commander in the Philippine Army,” Trillanes said.

Palparan is scheduled to be arraigned on Monday in the sala of RTC Branch 14 Judge Teodora Gonzales, who is hearing the case filed against the retired general’s coaccused, Lt. Col. Felipe Anotado and S/Sgt. Edgardo Osorio.