Senate bets on Comelec decision on Poe: ‘flawed, part of a scheme’ 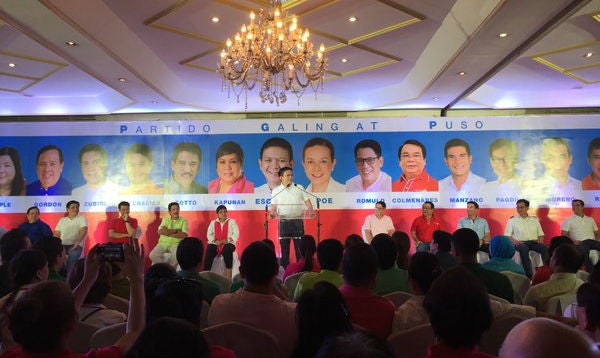 Senatorial aspirants running under “Partido Galing at Puso” (PGP) rallied behind their standard-bearer, Senator Grace Poe, saying that they are standing by her and confident that she will be allowed to run for president in the 2016 elections.

Ten of the 12 senatorial bets of PGP issued a declaration of support for Poe on Thursday, in response to the decision of the Commission on Elections (Comelec) Second Division to disqualify her from the 2016 presidential race for allegedly making false statements on her period of residency in the country and her status as a natural-born Filipino citizen.

The two other senatorial bets of PGP are Senators Vicente “Tito” Sotto III, a member of the Senate Electoral Tribunal who voted against another disqualification case filed against Poe, and, who is also running under the administration’s ticket.

(This is the result of “disqualification-planting” that I was talking about for the past few days. The planting of disqualification case against Senator Grace is a form of taking advantage and abuse by her rivals to remove the rights of Filipinos to choose a leader with skills and a heart in a clean elections.)

(It is also surprising that out of many aspirants who filed their candidacies for president, Senator Grace’s COC was first and lone to be canceled.)

“Efforts to bar Sen. Poe from running mirror the lack of social justice under the present dispensation. It shows the lack of an even playing field in this country especially when one is considered a threat to the administration,” he said.

Gatchalian said the battle is not yet over for Poe, saying the latter would pursue all legal remedies to fight for her dream to lead Filipinos in a government that is sensitive and responsive to the needs of the public.

Kapunan, who has been a practicing lawyer for 38 years, said: “The Comelec’s decision disregards the long line of precedents from the Supreme Court frowning upon disqualification cases based on sheer technicalities that tend to disregard the right of the sovereign people to their preferred leaders.”

Romulo said he is confident Poe would be allowed to run in the end despite the “politically-driven” efforts to eliminate her from the presidential race.

(The Constitution, laws and Supreme Court rulings I read are clear— Sen. Grace Poe is qualified to run as president. I believe that the law will prevail in the succeeding process. For a democratic country like ours, The important thing is that the voice of the people will prevail. Sovereignty resides in the people; we must allow them to be heard.)

Ople, for her part, said she was also saddened by the decision of the Comelec’s Second Division, and stressed that Poe should be allowed to seek the presidency and let the Filipino electorate decide.

“I commend Senator Grace Poe for her commitment to the legal process and full faith in the integrity of our institutions,” she said, “I believe that Senator Poe should be allowed to run for the highest office of the land and be judged by the Filipino electorate on the basis of competence, vision and platform of leadership.”

Pagdilao, who is also a lawyer, expressed confidence that Poe’s “baptism of fire will soon be over.”

“The Comelec en banc still has to rule on her motion. Her battle is not yet over until the high tribunal says so. She still has legal ammunitions to back her up on this,” he said.

Zubiri said he believes that Poe was being singled out by the Comelec, noting that she was the first to be disqualified by the poll body while it still has to rule on the candidacy of nuisance bets.

Manzano, who faced a similar disqualification case as candidate for vice mayor of Makati City in 1998, said the cases against Poe were meant to harass her because she has been consistently leading all presidential surveys.

“I’ve been there before. These are just part of the strategy of her foes to eliminate her from the presidential race,” Manzano said.

Gordon earlier disclosed being approached by the ruling Liberal Party and the United Nationalist Alliance members to file a disqualification case against Poe in connection with her citizenship. However, he said that he turned them down.

“My concern is not just about cheating through the PCOS (precinct count optical scan) system which many people are warning us, but more that they will try to use every trick and every tactic to get candidates disqualified so that they can win,” Gordon said. RAM

Read Next
State auditor suspended for chronic tardiness
EDITORS' PICK
What to watch out for when selecting a video surveillance solution
DOH says COVID-19 cases plateauing, but public shouldn’t be ‘complacent’
House energy committee chair Arroyo bats for cheap electricity
Unleash the photographer in you this World Photography Day with vivo smartphones
23,000 cops to be deployed nationwide for school reopening
Look Through: The fate of impounded stray dogs
MOST READ
Sharon Cuneta asks for prayers for friend in ICU who suffered silent stroke
Light therapy could be the answer to your sleep problems
Korina Sanchez reunites with former ABS-CBN co-anchors Julius Babao, Cheryl Cosim
PBA: San Miguel ousts Meralco to arrange finals duel vs TNT
Don't miss out on the latest news and information.