Alan Cayetano runs for VP, doubles as defender of faith in Duterte

Is he running for the second highest post in the land or as defender of the faith in his principal?

Sen. Alan Peter Cayetano may have found a new job: Defending presidential candidate, Davao City Mayor Rodrigo Duterte, who has been under fire lately for being a confessed womanizer and executioner, and for his expletive-filled speech that spared no one, not even Pope Francis.

“I will be very honest. You only defend him from some media and some members of the upper class because most of our people are longing for change,” Cayetano said when asked if he is worried that he will spend most of his campaign defending Duterte instead of presenting his platform.

“The mission has never been to change [Duterte],” the senator said during Wednesday’s meeting with the Inquirer editors and reporters. “The mission has always been for Duterte to change the country and for us to help see it through.”

Cayetano said he was “very comfortable” with the tough-talking official, and that in the last two weeks, they’ve spent a lot of time together, talking politics and discovering how similar their views are on several

issues, among them the need to decentralize the National Capital Region, and to do away with the contractualization of labor.

“We think alike on common issues,” said the official spokesperson of the Duterte camp. “But I have a different approach. If he is the fighter in the ring, I am the fighter in court [of law].”

Cayetano disputed claims from certain quarters that Duterte would eventually self-destruct and lose potential voters with his cursing and disclosures of his checkered past. 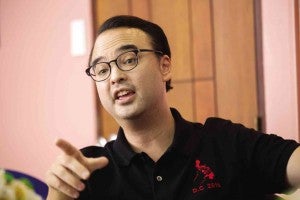 He was just being true to himself, the senator said of Duterte’s thuggish ways. “I think it is refreshing for people to see someone [being] authentic,” he added.

Duterte, the senator maintained, was for “honesty, anticorruption, good governance and equality under the law. He is who he is. He will not pretend to be something else just to get your votes. In fact he said that if you don’t like him, don’t vote for him.”

Cayetano, however, acknowledged that “some people may be offended or aghast at the start” with Duterte, but that they should pay attention to his often lengthy speeches to see the context behind the cursing.

At his PDP-Laban proclamation rally on Monday, Duterte railed against the horrendous traffic in the Metro because of the tight security surrounding the visit of Pope Francis in January. Stuck in traffic for five hours, the mayor used an expletive to describe how he would urge the Pope to go home.

He also publicly admitted to several crimes, among them killing a la “Fernando Poe Jr.” a kidnapper in Davao City barely three months into his job as mayor.

Duterte confessed as well to being a womanizer and having a relationship with two wives and two girlfriends.

While the PDP-Laban leadership had apologized for Duterte’s expletive directed at the Pope, Cayetano urged listeners to “just don’t follow his example,” the same advice given by his wife, Taguig City Mayor Lani Cayetano, when he told her about Duterte’s many women.

Cayetano, however, admitted that the mayor could potentially polarize voters. “Either you love him or you hate his guts,” the senator said, adding that the 70-year-old local executive’s weaknesses were also his strengths.

Having been mayor for 22 years of Davao City, which is thrice the size of Metro Manila, Duterte’s “effectiveness comes with the language” as he would talk to people from all walks of life in Davao, Cayetano said.

He may not be the ideal presidential candidate, but he is the best bet among all candidates in what is believed to be a five-way presidential race, the senator said.

“Would you rather have an honest man who says “PI” (expletive), or someone who steals

everything from you but does not curse?” said the senator who is known to be one of the most vocal critics of Duterte rival, Vice President Jejomar Binay.

According to Cayetano, the challenge for Duterte is to be more amiable, but for other presidential candidates, the challenge “is to tell people how can they make a real difference.”

The senator, who filed his candidacy for the vice presidency in October, even when he did not have a clear standard-bearer, said he took “a leap of faith” by asking to be Duterte’s running mate.

“Two presidential [contenders] offered me the VP slot, others offered me a Cabinet role. But I did not have peace in my heart until the day I went to Davao. I took a leap of faith that night and told (Duterte): ‘Mayor whether you run (for president) or not, I am for you,’” Cayetano recalled.

Cayetano had been lagging behind in surveys in recent months, but his rating doubled after Duterte gave him his endorsement, the senator said.