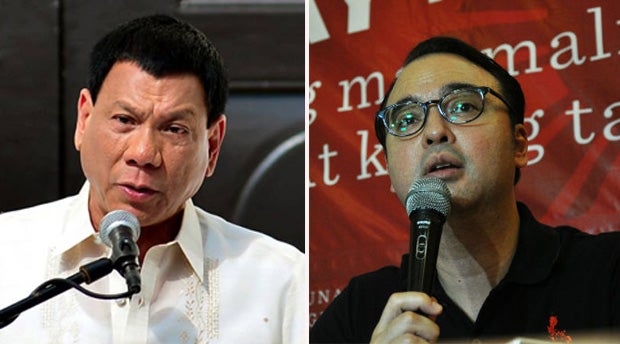 The proclamation of Duterte and Cayetano was held at the Century Park Hotel in Manila Monday afternoon.

Duterte was not the first presidential candidate of the party for the 2016 polls. PDP-Laban had backed anti-corruption advocate Martin Diño as its presidential bet.

However, Diño withdrew his candidacy after the Comelec sent him a letter to explain why he should not be declared a nuisance candidate.

Duterte officially declared his intention to run for president last Friday when he withdrew his certificate of candidacy for reelection as Davao City mayor and filed his COC for president.

In his COC, he said that he will be running under the banner of PDP-Laban.

He has also stated that Senator Alan Peter Cayetano will be his running mate.

Duterte has been firm on not running for president but changed his mind after the Senate Electoral Tribunal ruled that presidential poll frontrunner Senator Grace Poe is a natural-born Filipino and cannot be unseated from her office.

The tough-talking mayor said that he will not allow anyone to violate the Constitution.

“(Poe) will be presumptive president whose citizenship is based on presumption. The highest position is reserved for a true-blue Filipino,” Duterte earlier said when he put his candidacy “on the table” last Nov. 21.
“I cannot accept an American president,” he added.