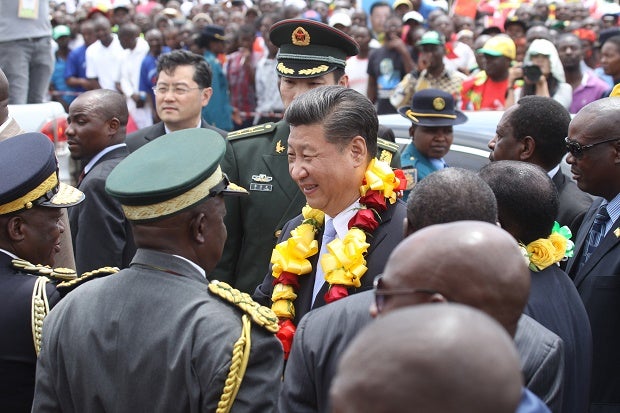 Chinese President Xi Jinping, center, is welcomed upon his arrival in Harare, Zimbabwe, Tuesday, Dec. 1.2015. Jinping is in Zimbabwe for a two day State visit during which he is set to sign some bilateral agreements aimed at strengthening relationships between the two countries. AP Photo

READ: China’s Xi heads to Zimbabwe ahead of Africa summit

A slew of deals are expected to be announced for power plants, infrastructure and agriculture projects, but analysts say Chinese largess in Africa has already been reined in this year.

China drove the commodity boom as it bought up oil, iron ore, uranium and copper from around the world over the past decade, but its growth has dipped this year, triggering a sharp slump in prices.

Speaking to reporters in Beijing, vice minister of foreign affairs Zhang Ming billed China’s “new normal” as a boon to Africa, saying the continent was now at “the early stage of industrialisation.”

“China-Africa cooperation has now come to a stage where it needs to be upgraded and transformed,” he said.

But Africa is already feeling the pinch, with Chinese investment falling by more than 40 percent in the first half of 2015, according to official data.

“The rhetoric will probably be very excitable, as usual. You have got to separate the rhetoric from reality,” Ian Taylor, professor of international relations at the University of St Andrews, told AFP.

“We are likely to see a more sober meeting point between China and Africa.”

Xi will hold talks with South African President Jacob Zuma in Pretoria on Wednesday before the sixth Forum on China-Africa Cooperation (FOCAC) opens at a convention centre in Johannesburg’s financial district of Sandton.

“The Chinese always emphasise that its economic engagement in Africa is not altruistic.

“In some cases, Beijing is willing to put up with a loss, but I think Xi is going to be very careful. Their foreign reserves aren’t unlimited.”

Ahead of FOCAC, China emphasised it had delivered more than $117 million of aid to affected areas during the Ebola crisis in West Africa, and also sent hundreds of medical workers to help.

Among many African countries hit by the Chinese slowdown, Zambia exemplifies the impact of falling commodity prices.

Its economy relies on exports of copper, the price of which has fallen 30 percent this year.

“We have to find other export products to China. I am certain that China requires something outside copper from us,” said Commerce Minister Margaret Mwanakatwe, who will attend the summit.

“The price of copper going down has led to job losses in the mines and the kwacha (local currency) to depreciate (by 45 percent).”

Zambian President Edgar Lungu last week ordered no new road projects to be started to save on spending.

Nigeria, the continent’s largest economy, has been another major player in China’s recent involvement in Africa.

At least 40 official development projects have been financed there by Beijing since 2004, including a $2.5 billion loan for rail, power, and telecommunications projects.

The Chinese have also provided military aid and equipment, and are building a new terminal at Abuja airport.

“They’re not going to let up on their very well-flagged goal of being on the front foot across the continent,” said Ryan Wibberley, an emerging market equity dealer at Investec in Cape Town.

Xi—accompanied by his wife Peng Liyuan—arrives in South Africa after a brief visit to Zimbabwe, where Chinese projects have helped support an economy plunged into crisis under President Robert Mugabe’s rule.