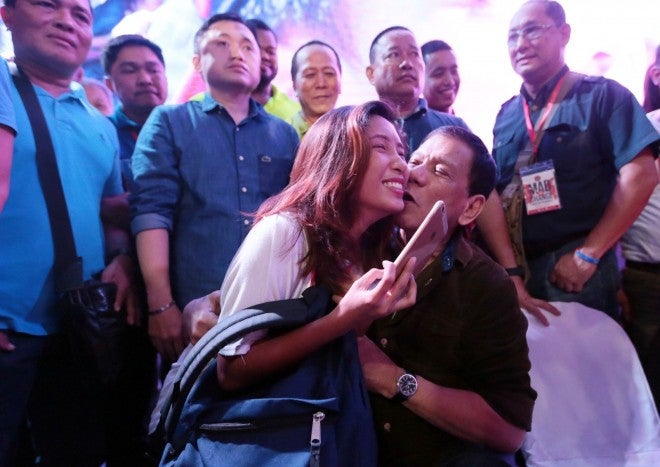 A women’s group on Tuesday slammed Davao City Mayor Rodrigo Duterte, saying “womanizing and flaunting it is an affront to women.”

Gabriela Partylist issued the statement after Duterte, in a no-holds barred speech on Sunday, admitted that he does not only have two wives but two girlfriends as well.

READ: Duterte: I have 2 wives and 2 girlfriends | LOOK: Duterte kisses, sits with women in Taguig event

The tough-talking mayor admitted that when he was younger, he would spend the whole night with his girlfriends, but since he had grown older, he could spend only “short time.”

“Womanizing and treating women as objects is an affront to women and it is not something that should be flaunted,” Rep. Emmie de Jesus of Gabriela Partylist said in a statement on Tuesday.

“This reeks of machismo, reinforces the society’s low regard of women and consequently increases women’s vulnerability to violence and abuse,” de Jesus said.

The lawmaker said this is “both distasteful and unacceptable.”

Gabriela called on candidates in the 2016 elections “to refrain from making statements and committing acts that are offensive to women.”

“Those setting their sights on ruling the country must impose upon themselves, the highest standards towards uplifting society’s views on women and helping ensure the protection of women from abuse,” de Jesus said.

Gabriela “urged Duterte and other candidates to delve into platforms and discuss women’s and people’s issues rather than employ derogatory statements and actions that malign women.” IDL

Read Next
Obama’s final State of Union speech set on January 12
EDITORS' PICK
Acer Philippines welcomes you to its first flagship store
PNP’s Covid-19 cases jump to 9,809; 52 new infections logged
Is your company a growth champion? Stand up and be recognized!
More than 150 National Guard in Washington for Biden inauguration test positive for coronavirus
New Year, New Rediscoveries
Pope Francis to miss events due to new flare up of leg pain—Vatican
MOST READ
Ellen DeGeneres, too, is baffled by viral Filipino soda ad
Wife stabs husband after seeing her younger self in old photos, thought he was cheating
Former Pampanga town vice mayor found dead in Angeles City
WATCH: Alex Gonzaga joined by family in Amanpulo honeymoon
Don't miss out on the latest news and information.