Estrada careful not to endorse presidential bet who will be disqualified 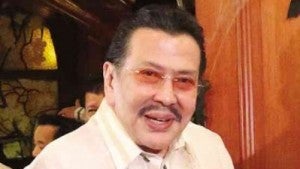 MANILA, Philippines — Manila Mayor Joseph Estrada said on Monday he would not want to waste his endorsement by backing a presidential candidate who would eventually get disqualified from the 2016 election.

“Baka yung mapili kong presidente ay madisqualify, sayang (It would be a waste if my chosen candidate for president gets disqualified),” Estrada told reporters after a program at the Liwasang Bonifacio commemorating the 152nd birth anniversary of Andres Bonifacio, the Supremo of the revolutionary group Kataastaasan, Kagalang-galang na Katipunan ng mga Anak ng Bayan or Katipunan.

He, however, did not say who among the presidential candidates he was referring to.

Grace Poe, his goddaughter and the adopted daughter of late fellow actor Fernando Poe Jr., is facing disqualification cases due to issues on her citizenship and residency in the Philippines. The Senate Electoral Tribunal recently dismissed the disqualification case filed by Rizalito David.

Estrada, however, said the perfect President in the 2016 elections would be the one who could put the interest of the masses, and peace and order concerns in his or her priority agenda for the country.

“The New Peoples’ Army and the Moro Islamic Liberation Front are still in Mindanao. The economy won’t grow if there’s no peace and order,” he told the Philippine Daily Inquirer in an earlier interview.

Asked if the formal filing of candidacy for president by Davao City Mayor Rodrigo Duterte would be a threat to other presidential aspirants, Estrada said he could not tell yet.  He said he needed to see the complete platforms of government of the candidates.

Duterte, a good friend of Estrada and perceived to have pursued vigilante justice in Davao City, led the recent Pulse Asia survey in the National Capital Region on preferred presidential candidates.

“It gives the voting population more choices to see who of them will be the best President,” he said referring to Duterte’s entry to the presidential race.

Estrada said the quality of platform of governance would prevail over his personal ties to the candidates.  “I will forget any kind of relationship I have with any of them,” Estrada added.

Liberal Party standard-bearer Mar Roxas, whom Estrada deemed the most qualified as the next leader of the country, was the trade secretary under Estrada’s administration. Miriam Defensor Santiago has been a senator since the time of Estrada’s presidency and has also been a friend of Estrada.  SFM