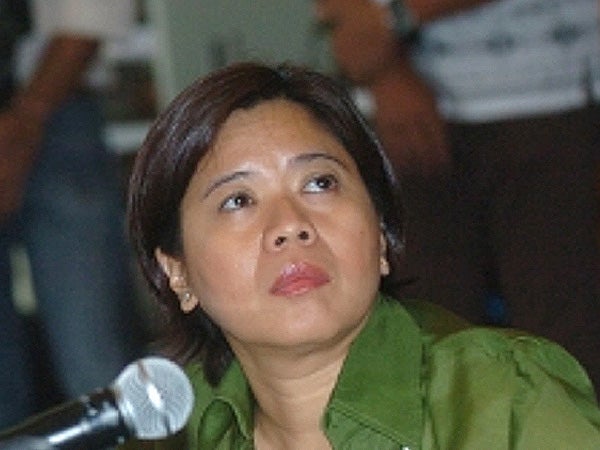 In an interview after her scheduled arraignment at the Sandiganbayan, Padaca ruled out suspicions that the Liberal Party (LP) had a hand in her ethics case before the court for alleged failure to file her SALNs.

But she questioned the LP’s way of allying with those who are not presumed to be practicing the reform agenda or the “Tuwid na Daan” anti-corruption slogan of the administration.

Roxas visited Isabela late October to distribute relief goods to victims of Typhoon “Lando.” It was during the visit that Governor Dy endorsed Roxas for the administration’s support to the province.

“My only question is the ease by which they could ally with people who are not known to be Daang Matuwid. ‘Yun lang ang question ko,” Padaca said, when asked if she feels the LP and President Benigno Aquino III had abandoned her.

Padaca said she longer expects any help from the LP in the new case lodged against her over her missing SALN.

Padaca said the bail paid for by her friend Aquino was actually cancelled and she is now out on bail on the graft case using her own money.

“Wala pa namang chance na kailangan ko na dapat mafeel. Frankly, I do not expect na. If they have their sights somewhere, maybe they think they have a bigger war to wage, I’ll give that to them,” Padaca said when asked if she still feels the LP’s support as she faces two cases.

Ombudsman prosecutors accused Padaca of violating the Code of Conduct and Ethical Standards for Public Officials and Employees, which require public officials to declare a truthful statement of their wealth, liabilities, properties, and business interests.

The Isabela provincial government supposedly only had on file Padaca’s 2004 and 2006 SALNs.

“Ang pinagtataka ko, ‘yung timing. During the filing of the COC. Medyo mabilis. If I compare ‘yung bilis ng pangyayari not only in the SALN case but also in the Sandiganbayan case tungkol sa P25-million loan for the farmers, nakikita ko ‘yung timeline, mas mabilis sa normal,” Padaca said.

(I am questioning the timing, which was during the filing of the COC) It was quite fast. If I compare its haste not only in the SALN case but also the case in the Sandiganbayan on the P25-million loan for farmers, I see the timeline is faster than usual.)

Padaca said she is no longer a member of the LP.

(When I was booted out of the Comelec, I did not return immediately, not even until now. It’s like I have imbibed by independence when I was still in Comelec.)

In an earlier statement on her office’s indictment against Padaca, Ombudsman Conchita Carpio Morales said Padaca should have her own receiving copies of her SALN because it is “customary and essential” for proper record-keeping.

Padaca, a polio survivor, served as Comelec commissioner from 2012 to 2014. She was eased out of the Comelec after she was bypassed by the CA.

Besides the ethics case, Padaca also faces separate charges of graft and malversation before the Sandiganbayan for awarding to a nongovernment organization a contract to manage a credit facility in 2006 without public bidding when she was Isabela governor.

Padaca toppled the Dy political dynasty in Isabela when she won as governor in 2004. She was reelected three years later only to be disqualified by the Comelec in 2009 in favor of Dy’s electoral protest. She lost in 2010 by a slim margin.

Padaca has maintained that the charges against her are politically-driven. Saying she was surprised that her SALN were missing, Padaca claimed she has no duty to keep receiving copies of her SALN when filed.

“Incidentally I’ve always been submitting my SALNs and even my closest staff in the capitol have religiously been submitting their SALNs. But when we checked with the Ombudsman it was not relayed, hindi pinasa,” Padaca said in the interview.

Padaca’s scheduled arraignment for the SALN case was cancelled after prosecutors told the court they would need to amend the case information. Her arraignment was reset to Feb. 18, 2016. IDL