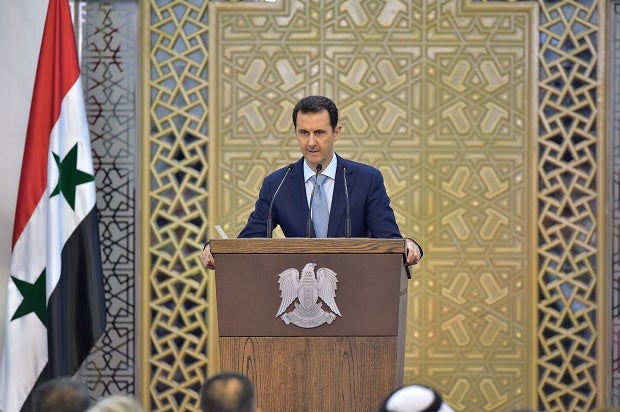 FILE – In this Sunday, July 26, 2015, file photo, provided by the Syrian official news agency SANA, Syrian President Bashar Assad delivers a speech in Damascus, Syria. Assad’s presidency looks likely to outlast Barack Obama’s. As the United States has turned its attention to defeating the ISIS group, it has softened its stance about the urgent need to push out the Syrian leader. SANA via AP File Photo

READ: Told he must go, Syria’s Assad may outlast Obama in office

The comments were a direct rebuff of repeated demands from the United States, France, Britain and Saudi Arabia that President Bashar al-Assad should step down and play no future role in war-torn Syria.

On his first trip to Iran in eight years, Putin, accompanied by his Foreign Minister Sergei Lavrov, went straight into a meeting with Khamenei, the Islamic republic’s ultimate authority.

Describing the 90-minute encounter as “quite constructive” and longer than planned, a Kremlin spokesman said the two countries had “unity of views” on Syria.

Russia and Iran are against “external attempts to dictate scenarios of political settlement” in the conflict-wracked state, and only Syria’s people could decide to dump Assad in elections following a ceasefire.

Khamenei said the US had a “long-term plan” to dominate Syria and the Middle East that would “disadvantage all countries, especially Iran and Russia.”

“This threat should be neutralised wisely and with closer interaction,” he was quoted as saying in a statement, meaning cooperation with Russia.

“Syria’s president was elected by people of various political, religious and ethnic views in a general election. The US cannot ignore Syrians’ vote and choice,” he added.

The countries that oppose Assad, led by the US, have said the Syrian leader’s actions against his own people, including the barrel-bombing of civilians, mean he had lost all legitimacy and should leave office.

Putin and Khamenei met before the Russian leader spoke at a major summit of gas exporting countries hosted by Iran’s President Hassan Rouhani in the capital.

Iran and Russia have become increasingly allied in Syria providing support that has propped up Assad’s government and forces since an uprising erupted in 2011.

What began as a conflict between Assad’s army and Western- and Gulf-backed rebels has since spiralled into a multi-faceted war that has killed more than 250,000.

Attention is currently focused on stopping Islamic State of Iraq and the Levant (ISIS) group jihadists, who last year seized large parts of Syria before surging into Iraq.

The threat from ISIS has taken on new potency and spread into Europe since the jihadists committed coordinated gun and bomb attacks in Paris on November 13, killing 130 people.

For Russia, defending Assad and confronting ISIS has become more important since the militants blew up a Russian airliner over Egypt’s Sinai Peninsula on October 31, killing all 224 on board.

Russia had one month earlier launched a wave of air strikes in support of Assad, whose Alawite sect, an offshoot of Shiite Islam, has close ties to Iran, the region’s main Shiite power.

Both Iran and Russia, which has a major sea port base in Syria, are seeking to limit US leverage in the Middle East.

Iran has sent commanders from its elite Revolutionary Guards to support and advise Assad’s forces, with Tehran coordinating a collection of Shiite militias on the ground.

On the economy, Russia and Iran are looking at business deals once sanctions are lifted under the July 14 nuclear deal between Tehran and world powers, including Moscow.

Putin stood alongside Rouhani at the opening of the gas summit, attended also by counterparts Nicolas Maduro of Venezuela, Muhammadu Buhari of Nigeria and Evo Morales of Bolivia.

Russia is also emerging as a long-term arms partner for Iran, despite the countries having a complicated history over territory, oil, commerce and communism.

The former Soviet Union was the first state to recognize Iran as an Islamic republic after the 1979 revolution. Moscow, however, later provided Saddam Hussein with weapons during the Iran-Iraq war.

A long-delayed delivery of an advanced missile defense system, the S-300, is due from Russia by the end of 2015.

During Putin’s visit the Kremlin announced it had lifted a ban on Russian firms working on uranium enrichment at Iran’s atomic sites, following the nuclear deal.