N. Korea wins back pride in ‘kimchi war’ with South 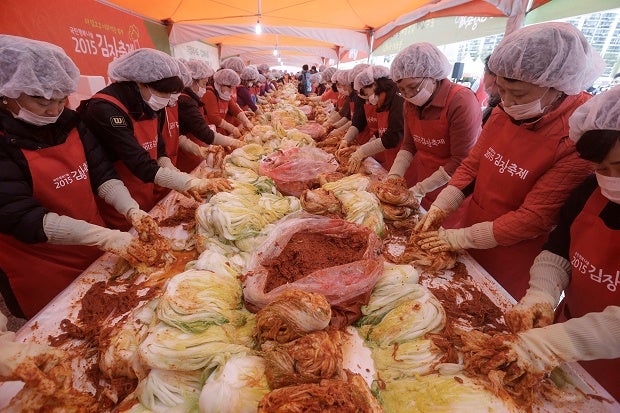 Women make kimchi, traditional pungent vegetable, to offer to needy people at Olympic Park in Seoul, South Korea, Thursday, Nov. 19, 2015. Hundreds of volunteers made 150,000 packets of kimchi. Made with cabbage, other vegetables and chili sauce, kimchi is the most popular traditional food in Korea. AP Photo

PARIS, France—North Korea scored a major victory in the kimchi wars Monday when the UN all but elevated its pickled vegetables to the same lofty status as its southern neighbor’s spicy capitalist cabbage.

Pyongyang suffered a blow to its prestige two years ago when South Korea’s kimchi—a favorite dish made mostly from fermented cabbage—was added to UNESCO’s prestigious list of the world’s “intangible cultural heritage.”

Not to be outdone, the north’s hardline Stalinist regime is now on the brink of getting the same classification for its own communist kimchi.

The fiery, often strong-smelling foodstuff can provoke equally strong emotions, with fierce rivalry between regions, communities and even families over whose kimchi is superior.

“Koreans share experience among themselves to make delicious kimchi according to season, while helping each other with raw materials and in preparation,” UNESCO said as it confirmed the inclusion of the Democratic Republic of Korea’s “red kimchi” on a list of nominations to be rubberstamped at a meeting next week in Namibia.

It is likely to joined on the list by the preparation of Arabic coffee, with which guests are traditionally welcomed in the region, following a successful joint campaign by Saudi Arabia, Oman and Qatar.

Fire in their bellies

Koreans traditionally get together in late November and early December to make enough kimchi to last through the peninsula’s long hard winter.

“The tradition contributes to social unity since it is practised in the whole society involving neighborhoods, relatives, villages and organisations,” the UN’s cultural arm added.

Blood-red and eye-wateringly hot, kimchi is eaten daily by 95 percent of Koreans, and more than half have it at as a side dish at every meal, including breakfast, according to a 2011 survey.

But not everybody is a fan. The all-pervading odour given off as the cabbage ferments in its salty brine of garlic and chili for a month or more can be too strong for some.

Joking at kimchi’s expense, nonetheless, got an Oscar-winning Hollywood film got into a pickle in 2014.

“Birdman” caused consternation when its main character, played by Michael Keaton, asked for flowers that smelt nice in a Korean flower shop only to be told by his snarky daughter that they all “smell like kimchi.”

Koreans were not amused. They point to kimchi’s status as a “superfood”, and many believe it was its health benefits that protected them when acute respiratory syndrome (SARS) spread from China in 2003.