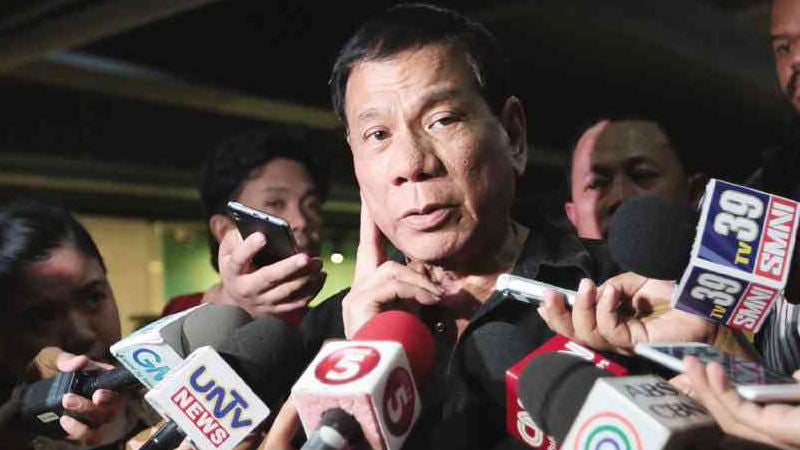 ‘THE DIE IS CAST’ Davao City Mayor Rodrigo Duterte says he has “crossed the Rubicon” and will definitely run for President in next year’s general elections. GRIG C. MONTEGRANDE

GO AHEAD, make my day.

Davao City Mayor Rodrigo Duterte on Monday vowed to challenge in the Supreme Court any attempt to derail his bid for the presidency in next year’s general elections.

Dropping his ambivalent attitude toward running for President, Duterte categorically declared on Saturday night that he was running and said that it was the Senate Electoral Tribunal (SET) decision to junk the petition for the ouster of Sen. Grace Poe that made him change his mind and decide to run.

He sounded more confident Monday, assuring supporters that he was now determined to seek the presidency despite possible legal obstacles.

On Sunday, Speaker Feliciano Belmonte Jr. expressed doubt that Duterte could run as substitute for Martin Diño, the presidential candidate of Partido Demokratikong Pilipino-Laban ng Bayan (PDP-Laban) who withdrew from the race on Oct. 29.

The election rules for substitution are silent on the vacuum created for PDP-Laban by Diño’s withdrawal.

Diño, a former Quezon City barangay captain, dropped out of the race for Malacañang when he learned that the Commission on Elections (Comelec) was poised to disqualify him as a nuisance candidate.

With PDP-Laban having no candidate, “what’s there to replace?” Belmonte asked on Sunday

Pimentel said Diño filed a withdrawal form but named Duterte on it as his substitute.

Normally, he said, when a candidate withdraws, the substitute files his own certificate of candidacy. But this did not happen because it was only last weekend when Duterte decided to run for President.

“This is unusual, but it’s very clear that Rodrigo Duterte is [Diño’s] substitute,” Pimentel said.

For mayor of Pasay

On Monday, election lawyer Romulo Macalintal also expressed doubts that Duterte could substitute for Diño because Diño’s certificate of candidacy (COC) showed that he registered as candidate for “mayor of Pasay City.”

“Diño’s COC appeared to be defective, hence it could not be the basis [for] any substitution because it is as if Diño never filed such a COC,” Macalintal said in a text message to the Inquirer.

He also noted that Diño was one of the registrants who had been ordered by the Comelec to show cause why they should not be considered nuisance candidates.

“If [the] Comelec later determines that Diño is a nuisance candidate for President then the more reason Duterte cannot sub for Diño. When a candidate is declared a nuisance, his COC is denied due course, or canceled, the effect of which is that it is as if no COC was filed,” Macalintal said.

“I have no problem with that,” Duterte told the Inquirer. “It’s up to the Comelec to decide. If they think they can disqualify me, go ahead. But I will file a [motion for reconsideration] and then go to the Supreme Court.”

Pimentel acknowledged that Diño’s COC had a “minor clerical error,” but it “should not and did not affect his candidacy for President.”

“Diño’s certificate of nomination and acceptance from the PDP-Laban is for President,” Pimentel said.

And the Comelec listed Diño as a presidential candidate, he said.

“Hence, the candidate, his political party and the Comelec understood that Diño was running for President,” he said.

Pimentel said he was confident Duterte would not be disqualified “just because of a minor clerical error” on Diño’s COC.

But Pimentel said Duterte should make sure that his own COC and other documents would be “free from errors, too, to avoid additional technical objections.”

Comelec will allow it

“There is no law or rule being violated by the Duterte substitution because Comelec rules allow substitution up to Dec. 10, 2015, of candidates with a party nomination,” Pimentel said.

Pimentel’s father, former Sen. Aquilino Pimentel Jr., said he believed the Comelec would allow the rectification of the error in Diño’s COC.

“Most likely the general intent to allow a replacement may prevail over the obstacle posed by the errors in the COC to be replaced,” the elder Pimentel said.

Duterte said there was no reason for him to withdraw from the presidential race.

“The die is cast. I have crossed the Rubicon,” he said.

Told that his rivals could use the technical objections to his substituting for Diño to derail his candidacy, Duterte said: “They can use it for all I care. I’m here on a matter of principle.”

Macalintal questioned Duterte’s statement that he changed his mind and decided to run for President because of the SET decision to throw out the petition for Poe’s ouster from the Senate on grounds of citizenship.

“If it’s true that Duterte is running for President just because Senator Poe was not disqualified by the SET, then his reason for running may not augur well or be disappointing to the electorate, who expected a Duterte running for good governance. Why should Poe’s qualification be the motivating factor for Duterte to run? Why not a desire to really and fully serve the people?” Macalintal said.

“I have to speak. I must find a day in my life to talk to the Filipino people and say my truth because [the SET ruling] is unconstitutional,” Duterte explained.

“I don’t believe in it. I will only follow the interpretation of the three [Supreme Court justices on the SET] because I’m a lawyer,” he said, referring to Associate Justices Teresita Leonardo-de Castro, Arturo Brion and Antonio Carpio, all of whom voted against Poe.

“Lawyers are for only what is right. Although the SET [is both a legal and a political body, its decision] still contravenes the Constitution,” he said.

Duterte confirmed that he had chosen Sen. Alan Peter Cayetano as his running mate.

Cayetano joined Duterte at the opening of a Japanese restaurant in Greenhills in San Juan City Monday.

Cayetano said those raising technical questions involving Diño’s COC were only “afraid of Duterte’s candidacy,” adding that drug lords and smugglers may be funding moves to stop Duterte from running.

“There are no legal issues [against Duterte’s candidacy]. Under the law, substitution is allowed,” Cayetano said.

“He’s bound to have some effect on the playing field. Everybody will just have to make some adjustments,” Belmonte said.

Welcome to the race

On Sunday, Poe, the leading candidate in the latest polls for the presidential election, and Vice President Jejomar Binay, running second to the senator, welcomed Duterte’s decision to join the presidential race.

On Monday, the administration’s presidential candidate, Mar Roxas of the Liberal Party, struck a confident posture when asked about Duterte’s decision to enter the race for Malacañang.

“Do I look worried?” he said, smiling, when asked if he felt threatened by Duterte’s run.

Roxas said he welcomed Duterte’s decision to run, adding that it could enrich the electoral process.

“Welcome to the campaign,” he said, referring to Duterte.

Duterte is joining a five-way race for the Palace. Besides Poe, Binay and Roxas, Sen. Miriam Defensor-Santiago is also running for President. With reports from Jerome Aning, Gil C. Cabacungan and DJ Yap