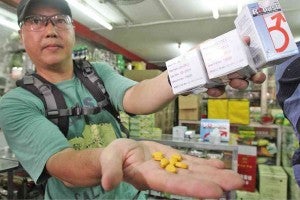 Simultaneous raids on five drug stores in Manila yield fake dietary supplements and slimming products prohibited by the Food and Drug Administration due to their toxic ingredients. JOAN BONDOC, INQUIRER

MANILA, Philippines — The Food and Drug Administration (FDA) said on Monday it has confiscated P5.9 million worth of unregistered and fake medicines available in the market this year, double than what was seized in 2014 in its effort to curb the proliferation of counterfeit drugs in the country.

Health authorities said the figure was a clear indication that the problem has persisted in the country and that the presence of fake drugs in the market posed a serious health threat to Filipino consumers.

In 2014, the FDA seized roughly P2.9 million worth of unregistered and fake medicines in the market.

“It’s not easy to fight this problem, not seeing much support. We call on legislators to give this agency some respect, some resources that it badly needs to do this difficult job,” said Health Undersecretary Kenneth Hartigan-Go, who spoke at the National Consciousness Week against Counterfeit Medicines in Muntinlupa City.

Go said curbing drug counterfeiting has been a “silent war” that should have an inter-government and multi-sectoral approach, with consumer awareness playing a very important element.

Counterfeit medicines could worsen an existing disease, cause adverse reactions with other medications and could lead to permanent disability and even death, stressed Go.

The FDA defines counterfeit drugs as those which contain no amount of or a different active ingredient or less than 80 percent of the active ingredient it purports to possess, as distinguished from an adulterated drug, including reduction or loss or efficacy due to expiration.

Melody Zamudio, officer in charge of the FDA’s Center for Drug Regulation and Research, said that while the real extent of the problem has been unclear, her office has verified 564 samples via registration verification request from routine monitoring and complaints from consumers and marketing authorization holders.

Of the 564 samples verified, six percent were counterfeit, 81 percent were unregistered, with 13 percent illegally diverted, said Zamudio.  Illegally diverted drugs refer to drug products that are genuine but are not intended for the Philippine market, according to the FDA.

Most of the cases of counterfeit drugs detected from January to October this year were from Metro Manila, Cavite, Pampanga, Isabela, Cebu, Bohol, Leyte, Davao and Zamboanga.

Zamudio also said fake drugs usually came from China, Pakistan and India. But many are also being manufactured locally.

The most commonly counterfeited drugs in the country are lifestyle medicines, such as slimming products and those for erectile dysfunction; leading branded and generic over-the-counter drugs in the market and medicines with high demand, such as rabies vaccines, antibiotics and anti-hypertensives.

“The [recent] data is a testament that the problem is existing and that consumer education, vigilance, and involvement are vital to avoid becoming a victim of these counterfeit medicines and to achieve the ultimate goal of combating their proliferation,” said Zamudio.

Go said the Department of Health and the FDA have been seriously studying a new policy that would bar permanently companies, that have been found violating “sensitive provisions” of the FDA law in terms of the quality and safety of medicine, from reapplying with the agency.

“We want to have a deterrent… so we are studying this process wherein we will prevent these violators from reapplying as another company owned and run by them in selling or distributing medicines,” said Go.  SFM