Modi in UK: Britain, India sign over $13.7 bn in deals despite protests 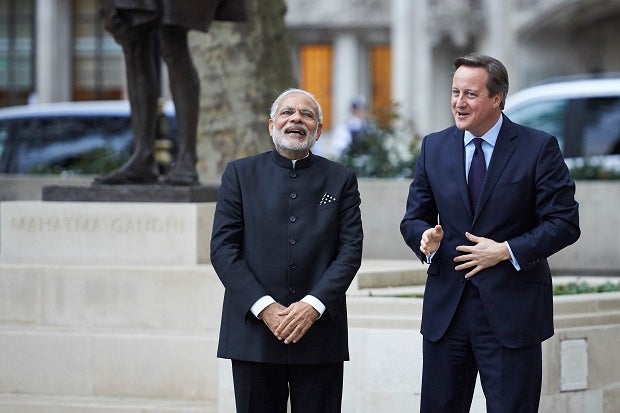 LONDON, United Kingdom—Britain and India welcomed more than $13.7 billion (9 bn pounds) in commercial deals during a visit by Indian Prime Minister Narendra Modi, but his arrival was overshadowed by protests over a perceived rise in intolerance back home. Modi got a warm welcome by British Prime Minister David Cameron, who has tried to cultivate closer ties with India to secure business opportunities in a fast-growing economy at a time when Modi has been prioritising other relationships.

For his part, Modi is seeking to restore his authority on the world stage after a defeat for his Hindu nationalist party in populous Bihar state on Sunday. He appealed to business to invest in a more transparent India in a speech at the Guildhall, a historic building in the heart of London’s financial district.

While Cameron said he wanted to support Modi in his efforts to transform India with improved infrastructure, the Indian leader signalled he wanted Britain to stay in the European Union, saying the country was India’s gateway to Europe.

“We want to become your number one partner for supporting the finance needed for this ambitious plan, making London the world’s centre for offshore rupee trading,” Cameron told him during a news conference, adding that plans were in place to issue more than 1bn pounds in bonds.

He later said in a statement: “During this visit, British and Indian companies are announcing new collaborations, together worth more than 9 billion pounds.”

The British government listed more than 20 deals and collaborations, including a 1.3bn pound ($1.98bn) investment by Vodafone.

Before the visit, diplomats said the Indian leader was keen to buy 20 more BAE Systems Hawk trainer aircraft to be made in Bengaluru.

Cameron has visited India three times since taking office in 2010 to try to climb up the diplomatic pecking order, but Modi is the first Indian head of government to pay an official visit to Britain, the country’s former colonial ruler, in almost a decade.

His visit comes at a time when a debate is raging in India over accusations that Modi is failing to rein in Hindu zealots trying to impose their values on all Indians.

As Modi and Cameron shook hands for the cameras outside Number 10 Downing Street, a crowd of about 200 protesters could be heard shouting anti-Modi slogans nearby.

“Our main concern is that minorities are not safe in India,” said Sikh protester Kuldip Singh.

The demonstrators held up banners with messages such as “Modi you are killing Indian democracy” and “Stop religious persecution in India.”

Asked about these concerns at his joint news conference with Cameron, Modi said India was a vibrant democracy in which individual rights were guaranteed by the constitution.

“There is something that is deeply entrenched in our culture, in our traditions, which is that of not accepting anything that has to do with intolerance,” he said, adding that violent incidents would not be tolerated.

Critics have accused Modi of remaining silent about incidents such as the recent deaths of four people attacked by Hindus enraged at reports of cows being slaughtered, smuggled or consumed, and the separate shootings of two prominent atheists.

Before his arrival in Britain, more than 200 writers, including Salman Rushdie and Ian McEwan, signed an open letter to Cameron urging him to raise concerns about freedom of expression in India during his talks with Modi.

The British government, however, rolled out the red carpet for Modi, who was greeted in the grand courtyard of the Treasury by a guard of honour wearing ceremonial bearskin headgear.

Modi was due to have lunch with Queen Elizabeth on Friday, before the emotional high point of his visit, a mass rally at Wembley Stadium where Modi will address about 60,000 supporters from India’s 1.5 million-strong diaspora in Britain.