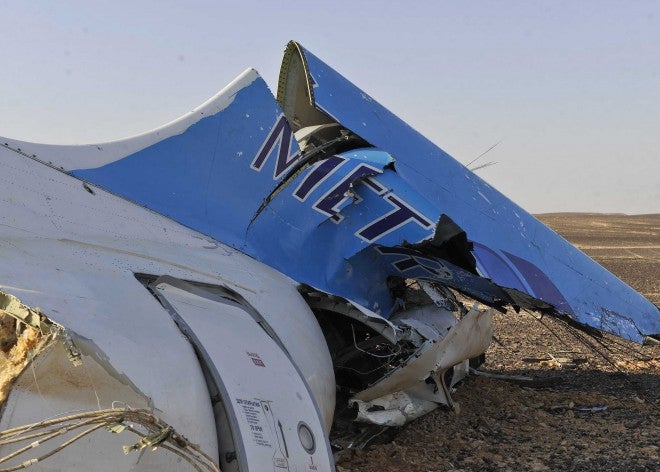 Investigators say a noise was heard in the last second of the cockpit recording from the Russian plane that crashed last week in Egypt’s Sinai Peninsula, the head of the joint investigation team said Saturday, bolstering U.S. and British suspicions that the plane was brought down by a bomb. AP

CAIRO, Egypt — A noise was heard in the last second of the cockpit voice recording from the Russian plane that crashed last week in Egypt’s Sinai Peninsula, the head of the joint investigation team said Saturday, bolstering U.S. and British suspicions that the plane was brought down by a bomb.

However, Ayman el-Muqadem warned it was too early to say what caused the plane to apparently break up in mid-flight. Analysis of the noise was underway.

“All scenarios are being considered … it could be lithium batteries in the luggage of one of the passengers, it could be an explosion in the fuel tank, it could be fatigue in the body of the aircraft, it could be the explosion of something,” said El-Muqadem, who is Egyptian and leading the investigation committee that includes experts from Russia, France, Germany and Ireland, where the plane was registered. El-Muqadem appeared alone at the news conference in Cairo.

U.S. and British officials have cited intelligence reports as indicating that the Oct. 31 flight from the Sinai resort town of Sharm el-Sheikh to St. Petersburg was brought down by a bomb on board. All 224 people onboard, most of them Russian tourists, were killed.

Islamic State extremists claimed they brought down the Metrojet flight, without offering proof, saying it was in retaliation for Moscow’s airstrikes that began a month earlier against fighters in Syria.

El-Muqadem said debris was found scattered across a 13-kilometer (8-mile) stretch of desert, indicating the Airbus A321-200 broke up mid-air, but initial observations don’t shed light on what caused it. Some pieces of wreckage were still missing, while the recovered pieces will be taken to Cairo for analysis, he said.

Egyptian airport and security officials told The Associated Press on Saturday that authorities were questioning airport staff and ground crew who worked on the plane and had placed some employees under surveillance. The officials all spoke on condition of anonymity because they were not authorized to speak to the media.

Also Saturday, Egypt’s foreign minister complained that Western governments had not sufficiently helped Egypt in its war on terrorism.

Egypt’s past calls for assistance and coordination on terrorism issues from “the countries that are now facing the danger” had not been dealt with seriously, Sameh Shoukry told a news conference. “European countries did not give us the cooperation we are hoping for,” he said.

Egyptian authorities have been trying to whip up support for a war on terror after the military overthrow of Islamist President Mohammed Morsi in 2013. A crackdown on Islamists and a series of militant attacks on security buildings and checkpoints, mainly in the Sinai Peninsula, have followed Morsi’s ouster — with a Sinai-based affiliate of the Islamic State group claiming responsibility for some of the most devastating attacks.

Shoukry also said countries that have suspended flights to Sharm el-Sheikh — which include the U.K. and Russia, though the foreign minister did not specifically name them — did not share the intelligence that drove their decisions with Cairo. Egypt “expected that the information available would be communicated to us instead of being broadcast” in the media, he said.

Russia announced Friday it was suspending flights to all of Egypt, joining the UK and Ireland, which had stopped flights to Sharm el-Sheikh. At least a half-dozen Western European governments told their citizens not to travel there. Empty charter planes have been flying to Sharm el-Sheikh to bring home stranded Russian and British tourists. Passengers were banned from checking in luggage — reflecting an apparent concern about security and luggage-screening procedures at the airport.

The crash one week ago dealt a huge blow to Egypt’s battered tourism sector, which is yet to fully recover from years of political turmoil. Russians comprise nearly a third of all tourists who visited Egypt in the past year.

There are currently 80,000 Russians in Egypt — 79,000 of them in the resort areas of Hurgada and Sharm el-Sheikh, Russian tourism chief Oleg Safonov was cited as saying by Russian news agencies.

Maya Lomidze, acting director of the Russian Association of Tour Operators, said authorities were sending 93 empty planes to Egypt on Saturday and Sunday to bring tourists home. The Russian Emergencies Ministry also said it would send planes to transport the checked baggage of Russian tourists who were forced to leave their suitcases behind.

Thousands of tourists waited in slow-moving security lines at the Sharm el-Sheikh airport on Saturday as they tried to board charter flights home. Many complained about a lack of information from travel agents and airlines, but seemed to accept tight security measures.

Designer Georgy Kononov and his family hoped to catch a flight to Moscow after a seven-hour delay. He said he agreed with Russia’s decision to suspend flights to Egypt.

“When we’re talking about the safety and security of people, it’s more important than the business,” he said, though he added that there should have been better planning for such a complicated situation.

Meanwhile, Britain’s Guardian newspaper reported that investigators had determined that a missile that came within 1,000 feet (300 meters) of a plane carrying British tourists to Sharm el-Sheikh on Aug. 23 was “probably a flare.” The Thomson jet was carrying 189 passengers.

Tui Group, which owns Thomson, said an investigation by Britain’s Department for Transport had concluded that the incident was not a “targeted attack” and likely connected to routine Egyptian military exercises in the area at the time. Thomson said there was “no cause for concern” for further flights.

The spokesman for Egypt’s Ministry for Foreign Affairs, Ahmed Abu Zeid, tweeted Saturday that the incident involved a  “ground-to-ground fire exercise” at an Egyptian military base a few kilometers from the Sharm el-Sheikh airport. The spokesman said airliners had previously been informed of the military exercise and that the Egyptian and British governments were “fully aware that plane was in no danger.”