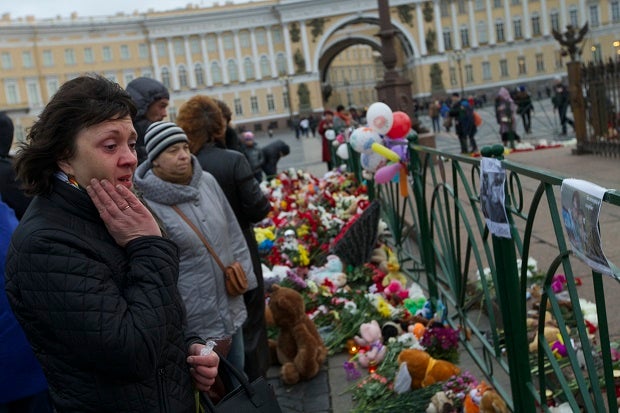 People look at photos of the plane crash victims attached to the fence at Dvortsovaya (Palace) Square in St. Petersburg, Russia, on Monday, Nov. 2, 2015. In a massive outpouring of grief, thousands of people flocked to St. Petersburg’s airport, laying flowers, soft toys and paper planes next to the pictures of the victims of the crash of a passenger jet in Egypt that killed all 224 on board in Russia’s deadliest air crash to date. AP

PETERSBURG, Russia — Mystery and confusion surrounded the final moments of a Russian jetliner that plummeted suddenly from high altitude to the Egyptian desert, killing all 224 people aboard. The airline Monday ruled out pilot error or a technical fault, but Russian aviation officials dismissed those comments as premature.

Some aviation experts raised the possibility that a bomb on board the Metrojet Airbus A321-200 brought it down, while others cited an incident in 2001 when the aircraft grazed the runway with its tail while landing.

James Clapper, the U.S. director of national intelligence, said that while there is no direct evidence of any terrorist involvement yet, it couldn’t be excluded that the plane was brought down by Islamic State of Iraq and Syria (ISIS) extremists in the Sinai Peninsula.

“It’s unlikely, but I wouldn’t rule it out,” he told reporters in Washington.

Asked if a terrorist attack could be ruled out, President Vladimir Putin’s spokesman, Dmitry Peskov, said: “No versions could be excluded.”

The Metrojet was flying at 31,000 feet over the Sinai when it crashed Saturday only 23 minutes after taking off from the Egyptian Red Sea resort of Sharm el-Sheikh for St. Petersburg with mostly Russian passengers.

Metrojet firmly denied that the crash could have been caused by either equipment failure or crew error.

“The only possible explanation could be an external impact on the airplane,” Metrojet’s deputy director Alexander Smirnov told a news conference in Moscow. When pressed for more details, Smirnov said he was not at liberty to discuss them because the investigation was ongoing.

Asked if the plane could have been brought down by a terrorist attack, he said only that “anything was possible.”

In televised comments from Egypt, Neradko said it would be possible to draw conclusions about the crash only after experts examined the plane’s flight data and cockpit voice recorders and studied the wreckage.

He said the large area where debris were scattered indicated the jet had broken up at high altitude, but he refrained from citing a reason for the crash pending the investigation.

Viktor Yung, another deputy director general of Metrojet, said the crew did not send a distress call and did not contact traffic controllers before the crash.

Egyptian officials have offered conflicting accounts on whether or not the plane issued any distress calls.

Experts say planes break up in flight usually due to one of three factors: a catastrophic weather event, a midair collision or an external threat, such as a bomb or a missile.

A local affiliate of the extremist Islamic State group has claimed it brought down the aircraft, which crashed in the northern Sinai where the Egyptian military and security forces have battled militants for years. Both Egyptian and Russian officials have dismissed that claim as not credible.

Still, the U.S., Germany and Britain all had overflight warnings in place for the Sinai. They advised airlines to avoid flying over the peninsula below 26,000 feet and to avoid the Sharm el-Sheik airport due to extremist violence and, notably, the use of anti-aircraft weapons.

British military analyst Paul Beaver said he thought the crash was most likely caused by a bomb on board, because the ISIS hasn’t been known to possess surface-to-air missile systems capable of striking passenger planes at cruising altitude.

“That’s a very serious piece of equipment, and I don’t think they have that sophistication,” Beaver said, adding that the Sinai desert is well-scrutinized by intelligence agencies, so a missile system would have been seen.

“Either a bomb was placed during the stopover and programmed to explode after takeoff, or a mechanic sabotaged the plane,” he said. “These are the two most probable hypotheses.”

Sabotage would require familiarity with the electrical or fuel systems of the A321-200, but hiding a bomb would need less knowledge, he added.

Galan said an analysis of the plane’s data and voice recorders — the “black boxes” —  will not confirm either a bomb or sabotage, as it records only the pilots’ communications and technical readings. But he said investigators could know within 48 hours whether a bomb downed the jet because the debris would show traces of explosives.

The plane’s operator has a spotty safety record and was rebranded recently in the wake of another deadly accident. The airline, registered as Kogalymavia, changed its trade name to Metrojet after one of its Tu-154 jetliners caught fire in 2011 while taxiing before takeoff, killing three people and injuring more than 40 others.

The Airbus A321-200 that crashed Saturday was built more than 18 years ago and changed several operators before entering Metrojet’s fleet in 2012.

One area investigators will look at closely is whether the tail separated from the rest of the plane in-flight as the result of damage caused by a previous incident in which the tail struck the runway during a landing, said aviation safety consultant John Cox. Such “tail strikes” can cause extensive damage to the aircraft’s skin in the region located by behind the rear lavatories and galley.

The incident occurred in Cairo in 2001. Metrojet said the jet underwent factory repairs and was safe to fly.

Cox said monthly maintenance checks typically can’t spot a return of damage from a tail strike because the cracks are inside the plane in an area that’s not normally accessible during visual inspections.

Instead, tail strike repairs are examined during heavy maintenance checks that typically take place about every four to five years, he said. Parts of the plane are disassembled so that inspectors can see inside. The plane’s skin is checked for cracks using a device that employs low voltage electricity or special dye.

“That’s a very complex repair and it requires very special expertise,” said Cox, a former airline pilot and accident investigator. Investigators will “look not only at whether the repair done properly, but were the inspections of the repair done on a regular basis during the normal heavy maintenance checks.”

If damage from a tail strike returned, it would be in form of small cracks that grow larger with the normal stresses of repeated pressurization and depressurization.

In 2002, China Airlines Flight 611 disintegrated in midair while flying from Taiwan to Hong Kong, killing all 225 people aboard. Accident investigators cited metal fatigue caused by inadequate maintenance after an earlier tail strike as the probable cause of the accident.

The Irish Aviation Authority said the Metrojet plane was registered in Ireland and regulators there found its safety documentation in order earlier this year.

At the crash site in the Sinai, emergency workers and aviation experts from Russia and Egypt searched the barren terrain for more bodies and examined the debris.

Investigators from France and Germany, representing Airbus, and from Ireland, where the plane was registered, were to join investigators in Egypt.

White House press secretary Josh Earnest said the U.S. offered support for the investigation, but he added that he’s not aware of any resources that have been dedicated to it so far.

“Rather than speculating on what may have led to this terribly tragic incident, we’re going to allow the investigation to move forward to try to get the bottom of what happened,” he said.

A Russian government plane brought 130 bodies and partial remains to St. Petersburg. The city is holding three days of mourning through Tuesday.

In his first public appearance since the crash, Putin described it as an “enormous tragedy” and said his thoughts are with the families of the victims.

Mourners have been coming to St. Petersburg’s airport since Saturday with flowers, pictures of the victims, stuffed animals and paper planes. Others went to churches and lit candles in memory of the dead.

Sunday was a national day of mourning, and flags flew at half-staff across Russia.