Bomb may have downed Russian jet, US, UK officials say 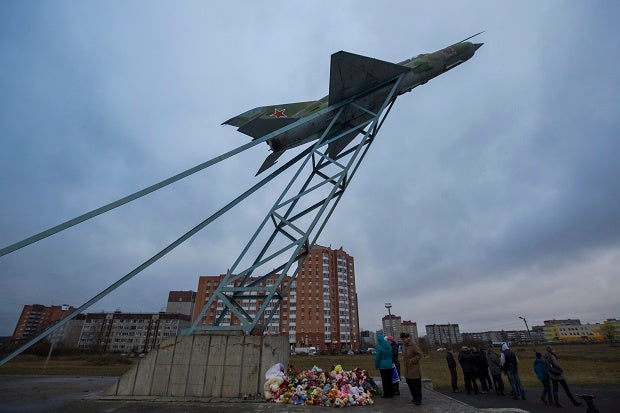 Local people come to pay their last respect to young family of Alexei Gromov, 27, his wife Tatyana, 26, and their ten-month-old daughter Darina, who was the youngest passenger in Russias deadliest plane crash last Saturday, which stole the lives of 224 people, struck Alexeis home town of Gatchina at a monument of Soviet fighter aircraft MiG-21 in Gatchina, 40 kilometers (25 miles) outside St. Petersburg, Russia, Wednesday, Nov. 4, 2015. These days residents of this small historical town, located 40 kilometers outside the center of St. Petersburg in Leningrad region and known for being home to one of major Russian imperial palaces, come to the local monument of Russias first military air field featuring a Soviet fighter aircraft MiG-21. AP Photo

LONDON, United Kingdom—British and U.S. officials said Wednesday they have information suggesting the Russian jetliner that crashed in the Egyptian desert may have been brought down by a bomb, and Britain said it was suspending flights to and from the Sinai Peninsula indefinitely.

Intercepted communications played a role in the tentative conclusion that the Islamic State of Iraq and Syria (ISIS) group’s Sinai affiliate planted an explosive device on the plane, said a U.S. official briefed on the matter. He spoke on condition of anonymity because he wasn’t authorized to discuss intelligence matters publicly.

The official and others said there had been no formal judgment rendered by the CIA or other intelligence agencies, and that forensic evidence from the blast site, including the airplane’s black box, was still being analyzed.

The official added that intelligence analysts don’t believe the operation was ordered by ISIS leaders in Raqqa, Syria. Rather, they believe that if it was a bomb, it was planned and executed by the ISIS’s affiliate in the Sinai, which operates autonomously.

Other officials cautioned that intercepted communications can sometimes be misleading and that it’s possible the evidence will add up to a conclusion that there was no bomb.

British Foreign Secretary Philip Hammond said there was a “significant possibility” the crash was caused by a bomb, and Britain was suspending flights to and from the Sinai resort of Sharm el-Sheikh indefinitely.

After a meeting of the British government’s crisis committee, COBRA, Hammond said Britain was advising its citizens not to go on vacation to Sharm el-Sheikh, which is visited by hundreds of thousands of Britons a year.

Meanwhile, Russian and Egyptian investigators said Wednesday that the cockpit voice recorder of the Metrojet Airbus 321-200 had suffered substantial damage in the weekend crash that killed 224 people. Information from the flight data recorder has been successfully copied and handed over to investigators, the Russians added.

Prime Minister David Cameron’s office said British aviation experts had been sent to Sharm el-Sheikh, where the flight originated, to assess security before British flights there would be allowed to resume.

Several British flights due to leave Sharm el-Sheikh for the U.K. Wednesday were grounded, leaving hundreds of tourists stranded.

Cameron’s 10 Downing St. office said late Wednesday that the team’s preliminary report “noted that the Egyptian authorities had stepped up their efforts but that more remains to be done.”

Downing Steet said it could not say “categorically” why the Russian jet had crashed.

“But as more information has come to light, we have become concerned that the plane may well have been brought down by an explosive device,” it said in a statement.

Cameron had discussed the issue of security at the Sharm el-Sheikh airport with Egyptian President Abdel-Fattah el-Sissi, who flew to Britain on Wednesday for an official visit, Downing Street said.

The British disclosures were an embarrassment to el-Sissi, who had insisted in an interview with the BBC on Tuesday that the security situation in the Sinai Peninsula is under “full control.” He has staked his legitimacy on restoring stability and reviving Egypt’s economy.

The suspension of flights is a further blow to Egypt’s troubled tourism industry, which has suffered in the unrest that followed the 2011 Arab Spring. The one bright spot for Egypt has been tourism at the Red Sea resorts.

The Irish Aviation Authority followed the British lead and directed Irish airlines to suspend flights to Sharm el-Sheikh Airport and into the airspace of the Sinai Peninsula “until further notice.”

“Other countries might soon follow them, Ramsay told The Associated Press, suggesting there may be political and commercial motives behind the British statement.

“They want to hurt tourism and cause confusion,” he added.

Several airlines, including Lufthansa and Air France, stopped flying over Sinai after the crash, but British carriers had kept to their schedules. Almost 1 million Britons visit Egypt each year, many to Sharm el-Sheikh, which is also popular with Russians.

The Metrojet flight carrying mostly Russian vacationers from Sharm el-Sheikh to St. Petersburg broke up in the air at an altitude of 31,000 feet 23 minutes after takeoff and came down in the Sinai desert, Russian officials said.

The plane crash site, 70 kilometers (44 miles) south of the city of el-Arish, lies in the northern Sinai, where Egyptian security forces have for years battled local Islamic militants.

Two U.S. officials told the AP on Tuesday that U.S. satellite imagery detected heat around the jet just before it went down.

The infrared activity could mean many things, including a bomb blast or an engine on the plane exploding due to a malfunction. One of the officials who spoke condition of anonymity because they weren’t authorized to discuss the information publicly said a missile striking the jetliner was ruled out, because neither a missile launch nor an engine burn had been detected.

The ISIS group claimed it had downed the plane because of Moscow’s recent military intervention in Syria against the extremist group, but el-Sissi dismissed that as “propaganda” aimed at damaging Egypt’s image.

Douglas Barrie, military aerospace expert with the International Institute for Strategic Studies in London, said it was too soon to say for sure the cause of the crash but the “general suspicion” that an explosive device was involved has been mounting. He said the British government’s decision made sense.

“It’s a political decision to err on the side of caution if it has been deemed possible that an explosive device was involved and there are concerns about the levels of security at the airport involved,” he said.

The Moscow-based Interstate Aviation Commission, which oversees civil aviation in much of the former Soviet Union, said in a statement that information from the Metrojet flight’s data recorder had been successfully copied and given to investigators. But the cockpit voice recorder “received serious mechanical damage.”

Egypt’s Aviation Ministry also said the voice recorder is “partially damaged” and that as a result “a lot of work is required in order to extract data from it.”

Metrojet, the plane’s owner, and Russian authorities offered conflicting theories of what happened. Metrojet officials have insisted the crash was due to an “external impact,” not a technical malfunction or pilot error.

Russian officials have said it’s too early to jump to that conclusion. El-Sissi told the BBC that the cause of the crash may not be known for months and that there should be no speculation until then.

Rescue teams in Egypt combed the Sinai desert for more remains and parts of the plane’s fuselage as grief-stricken Russian families in St. Petersburg faced an agonizing wait to bury their loved ones.

Russian and Egyptian rescue workers expanded their search area in the Sinai to 40 square kilometers (15 square miles). The Russian state television channel Rossiya-24 reported the plane’s tail was found 5 kilometers (3 miles) away from the rest of the wreckage.

Only one body has been released to a Russian family for burial so far. Relatives have identified 33 bodies and the paperwork is nearly finished on 22 of those, meaning the families should get the bodies shortly, said Igor Albin, deputy governor of St. Petersburg, in a televised conference call.