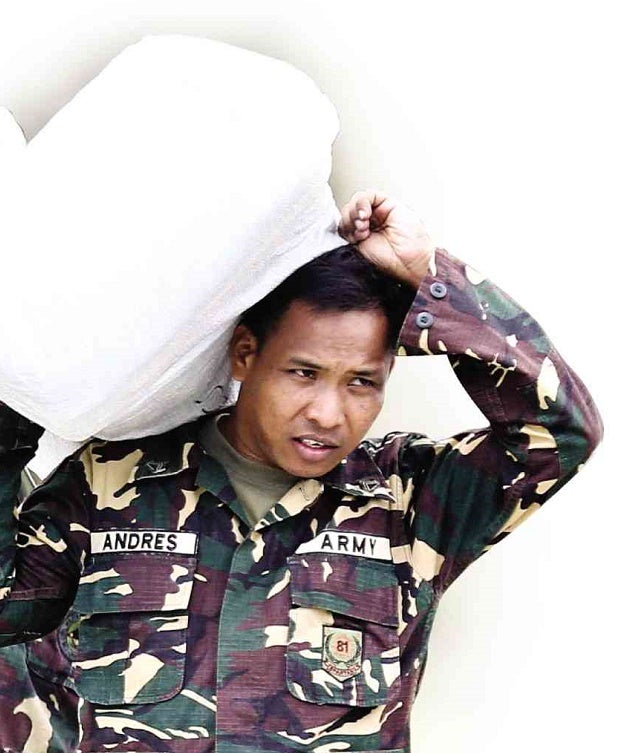 A SOLDIER carries a sack of relief goods for loading onto a C-130 plane bound for Aurora province.

CITY OF SAN FERNANDO—The Regional Development Council (RDC) in Central Luzon has set aside an initial P5 billion to fund rehabilitation efforts in areas hit by Typhoon “Lando” in the region.

Severino Santos, RDC vice chair and regional director of the National Economic and Development Authority (Neda), said the Department of Social Welfare and Development (DSWD) has proposed an initial P3 billion for rehabilitation, while the remaining P2 billion will come from the region’s Department of Public Works and Highways (DPWH) and Department of Agriculture (DA).

“Every agency has … money they could easily use for situations like calamities… It is always available to the agency,” said Santos.

Data presented by the Regional Disaster Risk Reduction and Management Council (RDRRMC) showed that the region lost more than P7 billion worth of crops and public and private property to the typhoon.

Santos said the total amount of funds needed for rehabilitation efforts in the region would be determined in the next meeting of RDC, RDRRMC and the Sectoral Committee on Social Development.

He said the RDC also scheduled a series of interagency workshops that would help Neda allocate funds for medium- and long-term rehabilitation in the 2017 budget.

Neda would also oversee the budget allocation and spending for the region’s rehabilitation, he said.

In Isabela, Gov. Faustino Dy III said the government has allocated P110 million to help corn and rice farmers whose farms were hit by the prolonged dry spell before Lando struck last month.