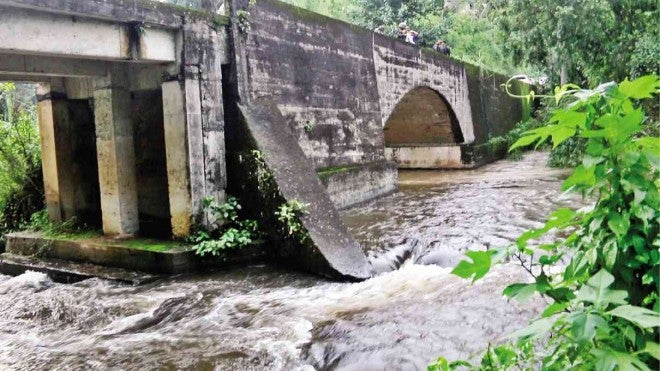 THE SPANISH Bridge in Barangay Kalipapa, Lumbaca Unayan, Lanao del Sur province, was once used by colonizers in the campaign to conquer the Moros. NASH MAULANA/INQUIRER MINDANAO

LUMBACA UNAYAN, Lanao del Sur—Once a path for war, a 124-year-old route here is being turned into what officials said is a road for peace.

Abdullah Dumagay, municipal planning and development officer of this town, said the Office of the Presidential Adviser on the Peace Process  allocated P54 million for the rehabilitation of the town’s section of the total 26-kilometer Lumbatan-Malabang Road.

Don Mustapha Loong, public works  secretary of the Autonomous Region in Muslim Mindanao (ARMM), said the rehabilitation of the Spanish bridge, which is on the route and spans the main waterway of the Kalipapa Waterfall, has been given P100 million from the region’s P10 billion infrastructure program fund for 2016.

The Spanish bridge, apparently designed for horse-drawn carts and foot troopers, was built here between 1891 and 1892, to advance Spaniard forces to Dansalan Fort (now Marawi) where the Maranaos, led by local hero Amai Pakpak, engaged the foreign invaders under Governor General Valeriano Weyler in 1895.

“We want to upgrade this old road from one used as a ‘way-to-war-and-exploitation’ into a ‘road-to-peace-and-preservation,’ more than a century after the Maranaos successfully repelled foreign invasion here,” Hataman said.

Residents said the road was also built by the Spaniards for access to an iron mine in the mountain village of Kalipapa, where locals resisted foreign occupation.

Hataman said the rehabilitation of the Spanish bridge should also be coordinated with the National Historical Commission of the Philippines.

Dumagay said the old road, which has been closed to traffic for almost 30 years due to peace and order concerns, is actually the shorter route from Marawi to Malabang. Nash Maulana, Inquirer Mindanao