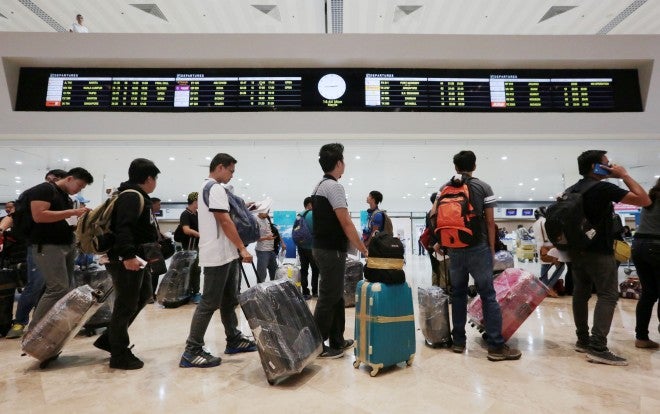 Departing travelers with their luggage wrapped in plastic to avoid being victims of “tanim-bala” wait in line to check in at the Ninoy Aquino International Airport Terminal 1 on Nov. 2. Amid the proliferation of alleged incidents of inserting the contraband in bags of unsuspecting airport passengers, presidential aspirant Mar Roxas on Thursday said he condemned the perpetrators of the racket as he sympathized with its victims. The Liberal Party standard-bearer came under fire on Wednesday following his statement that the government was not to blame for the entry of bullets in the country’s airports. INQUIRER PHOTO

After being criticized for saying passengers were the ones responsible for carrying bullets in airports, Liberal Party standard-bearer Mar Roxas condemned the alleged syndicate behind the “tanim-bala” racket and expressed sympathy for its victims.

“Much anger, fear, and embarrassment has been caused by these laglag-bala incidents. Our OFW (overseas Filipino worker) heroes have been victimized along with the image of our country,” said Roxas in a statement on Thursday.

“The syndicates behind this must be held to account. We condemn the greedy and selfish few who victimize our countrymen.”

Roxas’ earlier statement that the government was not responsible for the discoveries of bullets in the bags of airport passengers was met with heavy criticism from netizens.

READ: Roxas, Robredo not on the same page on ‘tanim-bala’ scam

Airport authorities have been under fire over alleged bullet-planting incidents by a syndicate, according to Inquirer sources, composed of airport security officers and porters who victimize unsuspecting passengers, commonly “gullible” OFWs and senior citizens.

“I am confident that the perpetrators will be caught; nevertheless, the damage has been done. Our OFWs, tourists, investors, and ordinary travelers have been shocked and humiliated; the victims could have been any one of us,” he said.

“This is the root of our indignation. Regardless of the statistics, ‎one person wrongfully accused is one case too many.”

Roxas hoped for the immediate resolution of the scam that had drawn public outrage and the attention of international agencies and media.

He also called on the public to cooperate with the authorities and remain vigilant at the same time.

“I join the rest of the country in hoping for the speedy resolution of this issue. As the investigation ensues, I call on everyone to exercise continued vigilance and to cooperate fully with the authorities. Let us contribute what we can to achieve justice, hold those behind these incidents accountable, and fulfill our primary goal: To ensure that every traveler can enter and leave our airports with 100 percent peace of mind,” he said. Julliane Love de Jesus/RC