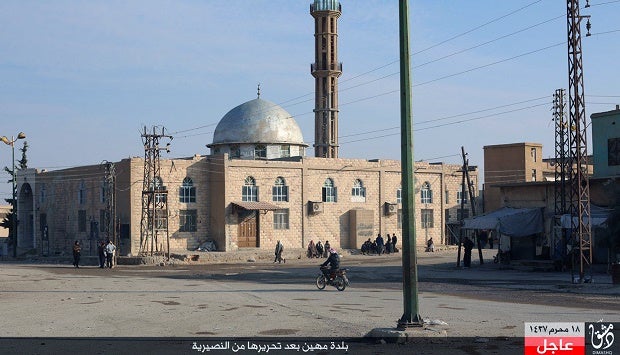 This image posted on Sunday, Nov. 1, 2015, by a website used by ISIS militants, shows Syrians in front of a mosque in the village of Mahin, central Homs province, Syria. ISIS militant website via AP

Washington’s latest broadside against Russian intervention in Syria came as government troops, emboldened by Moscow’s support over the past month, recaptured from the Islamic State of Iraq and Syria (ISIS) group a key road into second city Aleppo.

Speaking to the House Foreign Affairs Committee, US Assistant Secretary of State for Near Eastern Affairs Anne Patterson said the offensives, backed by Russian air strikes, had displaced at least 120,000 people.

“So far, then, this has not been a Russian fight against terrorism so much as an effort to preserve the Assad regime.”

Patterson said the situation called for a “full court press to end the war and get to a political settlement.”

“The Russian deployments cannot be used to stiffen the Assad regime’s resistance to a political transition.”

Regime forces launched major offensives in several parts of Syria after Russia began its intervention on September 30, with more than 1,300 air strikes carried out so far.

Wednesday, the army recaptured the sole route into the government-held side of Aleppo city, effectively breaking a nearly two-week siege.

It gained full control of the route from the regime-controlled west of Aleppo to Khanasser, Ithriya and Al-Salmiyeh “after eliminating a number of Daesh (ISIS) terrorists,” state television said.

Advancing IS forces cut off the route at the end of October.

State TV said the road was now being demined and would reopen to traffic Thursday.

The Syrian Observatory for Human Rights, a Britain-based monitor, said the frontline with ISIS fighters had been pushed back about 10 kilometers (six miles) from the route.

Aleppo, once Syria’s economic hub, has been ravaged by years of fierce fighting.

The city has been divided between government control in the west and rebels in the east since shortly after fighting there began in mid-2012.

Regime forces have launched offensives in Aleppo, Hama, Homs and Latakia provinces since the Russian air campaign began, but registered only modest advances.

They have also continued to pound the rebel-held Eastern Ghouta area outside Damascus.

The Observatory said Wednesday at least 12 people were killed in government shelling on Douma in the rebel region.

The town is the frequent target of regime fire, with at least 70 people killed there in government attacks Friday.

Elsewhere, the Observatory said the civilian death toll had risen to 23 in apparent Russian strikes Monday on the IS-held town of Al-Qaryatain.

In recent weeks, diplomatic efforts have been stepped up to resolve the conflict, which has left more than 250,000 dead and forced millions from their homes since March 2011.

In Moscow, UN Syria envoy Staffan de Mistura said Wednesday that the Syrian government and opposition should start talking to each other.

Russia hosted de Mistura after 19 key international players met for talks in Vienna Friday, including the United States, Iran and Saudi Arabia, in the broadest push yet to end the conflict.

The meeting, which did not include any representatives of the Syrian government or its opponents, agreed to ask the United Nations to broker a peace deal between the regime and opposition to clear the way for a new constitution and UN-supervised elections.

Another round of international talks will be held in two weeks.

Speaking after talks with Russian Foreign Minister Sergei Lavrov, de Mistura said the United Nations was ready to bring together representatives of the government and the opposition for talks in Geneva.

“We are ready, the UN is ready, to start immediately with this process in Geneva,” de Mistura said.

“When? As soon as possible,” he said.

Clinton backs decision to send US commandos into Syria