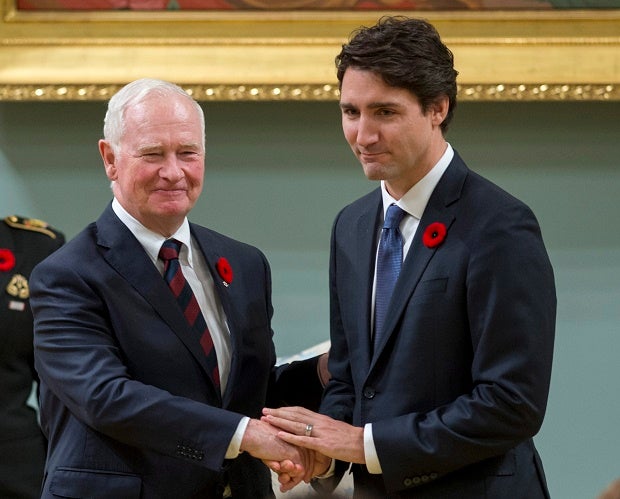 OTTAWA, Canada—Canada’s new Prime Minister Justin Trudeau promised big changes after nearly a decade of Conservative rule as he was sworn into office Wednesday, almost 50 years after his father took the job.

READ: Trudeau to be sworn in as Canada’s new prime minister

The 43-year-old former bartender led his Liberal party to a landslide victory on October 19, dealing a crushing blow to Stephen Harper’s Conservatives. He is the second-youngest prime minister in Canadian history.

Trudeau smiled and mouthed “Thank you” as applause erupted in the flag-waving crowd gathered outside Rideau Hall, the governor general’s mansion, to watch on giant screens as he took the oath as Canada’s 23rd prime minister.

“We have an awful lot of work to do in coming weeks, months and years,” Trudeau said.

“But I know that Canadians expected us to… deliver on the change, on the ambitious plan for this country that the Liberal party ran on, and that’s exactly what we’re going to deliver.”

Canada’s youthful leader—slammed as being too inexperienced to govern in campaign attack ads—faces a diverse set of challenges, from bolstering the country’s economy to slashing carbon emissions and ratifying a US-led Pacific free trade pact.

Trudeau unveiled a new-look cabinet, equally split with 15 men and 15 women, featuring some political veterans and some fresh faces.

Former native chief Jody Wilson-Raybould was named Canada’s first aboriginal justice minister, and is expected to shepherd a key Liberal election promise of holding a public inquiry into the fate of more than 1,000 missing and murdered aboriginal women.

The cabinet also includes Maryam Monsef, the youngest minister at age 30, who came to Canada as a refugee from Afghanistan, and Amarjeet Sohi, who once spent two years in an Indian prison without being charged.

Wednesday marked the first time the Canadian public was officially invited to witness the swearing-in ceremony in person.

A large crowd gathered in a carnival-like atmosphere for the event under a bright blue sky and colorful fall foliage. Two massive screens were set up outside the mansion for public viewing.

“We all knew his father and after a decade of Conservatives in power this is a historic change in government,” said one spectator, Robert Boisvert.

Many had traveled to Ottawa from Montreal and Toronto, and camped out to get a glimpse of the new prime minister, who glad-handed dozens of people as he walked in with his wife Sophie Gregoire and inner circle.

“Obviously, I think of my father and how pleased he must be that Canada so firmly came together around an ambitious vision for the country that we presented,” Trudeau said.

“But my thoughts today—sorry, dad—are not mostly on him. They’re very much on my own kids and on the kids across this country that we’re going to work very, very hard to ensure they have a better future.”

The Trudeaus have three young children.

Trudeau was first elected to the House of Commons in 2008, after years trying out different roles. He worked as a whitewater guide, snowboard instructor, bartender, bouncer and public speaker.

He and his family will not move into the prime minister’s official residence where Trudeau grew up because it must undergo a massive renovation. Instead they will stay at a guest house on the governor general’s estate.

Parliament will be recalled on December 3, with the government slated to lay out its legislative agenda the following day.