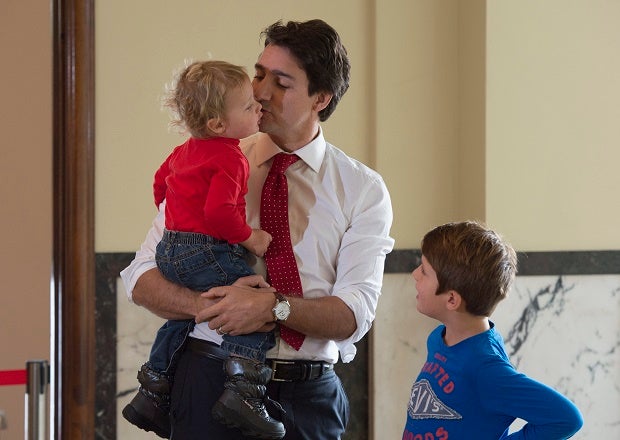 Liberal leader Justin Trudeau kisses his son, Hadrien, as son Xavier looks on while they wait to vote at a polling station Monday, Oct. 19, 2015 in Montreal. Canadians voted Monday to decide whether to extend Conservative Prime Minister Stephen Harper’s near-decade in power or return Canada to its more liberal roots. ADRIAN WYLD/THE CANADIAN PRESS VIA AP

TORONTO — Canadians voted for a sharp change in their government Monday, returning a legendary name for liberals, Trudeau, to the prime minister’s office and resoundingly ending Conservative Stephen Harper’s near-decade in office.

Trudeau, tall and trim at 43, channels the star power — if not quite the political heft — of his father, who swept to power in 1968 on a wave of support dubbed “Trudeaumania.”

Pierre Trudeau, who was prime minister until 1984 with a short interruption, remains one of the few Canadian politicians known in America, his charisma often drawing comparisons to John F. Kennedy.

Justin Trudeau, a former school teacher and member of Parliament since 2008, becomes the second youngest prime minister in Canadian history.

Trudeau has re-energized the Liberal Party since its worst electoral defeat four years ago when they won just 34 seats and finished third behind the traditionally weaker New Democrat Party. Trudeau promises to raise taxes on the rich and run deficits for three years to boost government spending. His late father, who took office in 1968 and led Canada for most of the next 16 years, is a storied name in Canadian history, responsible for the country’s version of the bill of rights.

A bachelor when he became prime minister, Pierre Trudeau dated actresses Barbra Streisand and Kim Cattrall and married a 22-year-old while in office.

“We have a chance to bring real change to Canada and bring an end to the Harper decade,” Trudeau said Sunday in Harper’s adopted home province of Alberta, traditionally a Conservative stronghold.

Canada has shifted to the center-right under Harper, who has lowered sales and corporate taxes, avoided climate change legislation and clashed with the Obama administration over the Keystone XL pipeline.

The Trudeau victory will ease tensions with the U.S. Although Trudeau supports the Keystone pipeline, he argues relations should not hinge on the project. Harper has clashed with the Obama administration over other issues, including the recently reached Iran nuclear deal.

Trudeau’s opponents pilloried him as too inexperienced, but Trudeau embraced his boyish image on Election Day. Sporting jeans and a varsity letter jacket, he posed for a photo standing on the thighs of two his colleagues to make a cheerleading pyramid, his campaign plane in the backdrop with “Trudeau 2015” painted in large red letters.

The Liberals were elected or were leading in 185 districts, with Trudeau winning his Montreal district. The party needed 170 to gain a majority.

The Conservatives were next with 97, followed by the New Democrats at 28 and Bloc Quebecois with nine.

Harper, 56, visited districts he won in the 2011 election in an attempt to hang onto them. On Saturday, he posed with Toronto’s former crack-smoking mayor, Rob Ford, in a conservative suburb.

Harper had said he would step down if his party didn’t win the most seats. Former colleagues of Harper said he would be personally devastated to lose to a Trudeau, the liberal legacy he entered politics to destroy. Harper’s long-term goal was to kill the widely entrenched notion that the Liberals — the party of Pierre Trudeau and Jean Chretien — are the natural party of government in Canada, and to redefine what it means to be Canadian.

Hurt when Canada entered a mild recession earlier this year, Harper made a controversy over the Islamic face veil a focus of his campaign, a decision his opponents seized on to depict him as a divisive leader.

Paula Mcelhinney, 52, from Toronto, voted Liberal to get rid of Harper.

“I want to get him out, it’s about time we have a new leader. It’s time for a change,” she said.