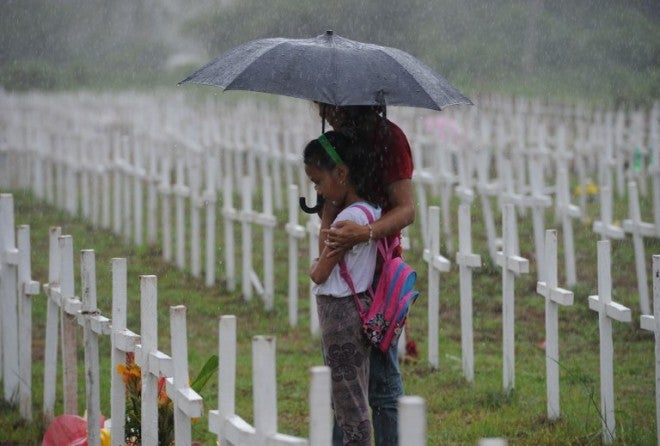 A mother and her daughter brave heavy rains as they visit graveyard of their loved ones at the mass grave for victims of typhoon Haiyan, during the traditional visit to family graveyards in Tacloban City, Leyte province, central Philippines on November 1, 2015. Millions of the people in the Philippines made their annual pilgrimage to their family gravesites on November 1, in a tradition that is part Catholic ritual and part love of festivity, and recent tragedies like super typhoon Haiyan are a sharp reminder of the constant danger to life in this disaster-plagued nation. AFP PHOTO / TED ALJIBE

TACLOBAN CITY, Philippines — Millions of people in the Philippines made their annual pilgrimages to family gravesites on Sunday in a tradition that combines fervent Catholic faith with the country’s penchant for festivity.

The overwhelmingly Catholic Philippines has long celebrated All-Saints’ Day on November 1 as an occasion to gather at the graves of loved ones, to light candles and pray for their souls.

While many people in Manila’s sprawling cemeteries treated the event like a giant picnic, in the central city of Tacloban, which is still suffering the devastation of Super Typhoon Yolanda (international name Haiyan), the mood was mournful and somber.

Many of the mourners had to visit a mass grave where more than 2,400 bodies were interred after Yolanda, the strongest typhoon ever recorded to hit land, ravaged the city in November 2013.

The city government has covered the mass grave with scores of small white crosses and families have taken to labeling the crosses with the names of their deceased loved ones.

Rebecca Gonzales Daa, 56, was one of the many who brought flowers and candles to the mass gravesite for her late husband, Raul, one of more than 7,350 people left dead or missing by the storm’s tsunami-like waves.

“We had evacuated, my mother and other siblings fled to my uncle’s apartment but my husband went home. He was worried about our pigs and our belongings,” she recalled tearfully.

“We found his body with a large wound on his head later. He must have been hit by a piece of floating debris,” she told AFP.

In the aftermath of the disaster, with piles of bodies lining the streets and funeral parlors destroyed, Tacloban authorities resorted to burying the dead together.

“We used to visit the graves of my father, my brother on All-Saints’ Day. I would bring snacks. It wasn’t so sad because I would see my family. It was like a reunion,” Daa recalled.

“Now, it is a sad occasion. I tell (my husband), we are left alone with no one to watch over us,” she said.

Ricka Joy Quisay, 17, lit candles in front of the Tacloban cemetery because she isn’t even sure her mother is in the mass grave.

Quisay fled to an evacuation center before the storm struck but her mother, Rebecca, 59, did not believe Yolanda would be that strong.

“The next day, we saw her body just placed alongside the road. It lay there for two weeks till it got bloated and was finally carried away by a truck,” she said.

“Before, All-Saints’ Day wasn’t sad. My mother would light candles in front of our house. But now, my mother is the one we are lighting candles for,” she said.

Pot-luck at the graveyard

The mood in Manila, which was spared the worst of Haiyan’s fury, was more light-hearted. City officials even had to ban loudspeakers, loud radios and even decks of cards from cemeteries to maintain a modicum of solemnity.

Housewife Alidia Cecilia, 72, said she came to the cemetery every year because it was a chance for her extended family to bond together.

A huge tree gives a welcome shade over her family’s cemetery plot and many of the country’s fast food franchises have established booths to feed her hungry grandkids.

Retired accountant Rely Reyes 61, said she comes not just to visit the graves of her relatives, “but also to commune with the living.”

“This is a chance to see all the members of my family. It is all a pot-luck gathering. The family understands we all need to bring something to be shared. That is the Filipino way,” she said.

Teenage visitors at her plot chatted animatedly while nibbling on snacks, casually using the huge stone tomb as a bench.

“We all pay our respects in our own way. We maintain the continuity among the generations,” she told AFP.