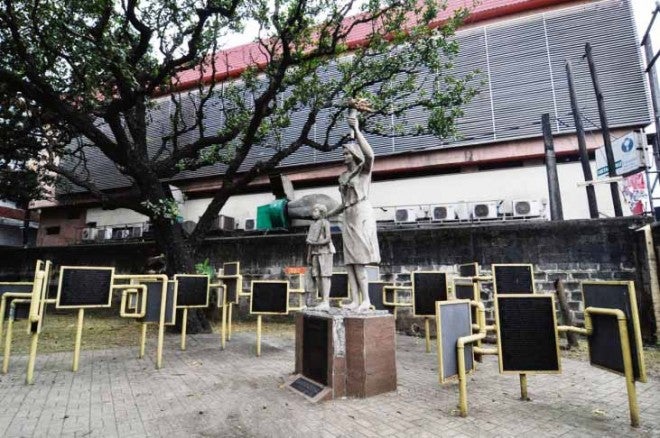 THE BANTAYOG ng mga Desaparecido on the grounds of the Baclaran Church in Parañaque City lists the
names of the disappeared since 1972. RICHARD A. REYES

CITY OF SAN FERNANDO, Philippines—The families of the desaparecidos (disappeared)—persons who were never seen again after falling into the hands of state agents or under unknown circumstances during and after martial law—will mark All Saints’ Day or Undas with reluctance and sadness.

“That’s because there is no closure yet,” said Nilda Lagman-Sevilla, chair of the Families of Victims of Involuntary Disappearance (Find).

Sevilla said she did not want to think that her brother, Hermon Lagman, a labor and human rights activist who was seized by government agents on May 11, 1977, was dead. Lagman was arrested five years into the martial law regime of Ferdinand Marcos.

“He must be 69 by now,” Sevilla said. Former Rep. Edcel Lagman, an activist himself, is another brother.

Sevilla has persisted in keeping Hermon alive in her heart and mind, with her memories focused on his sacrifices defending workers’ rights.

Grace Topacio does the same for her husband, Renato, who disappeared in 1988.

“Undas is about remembering our dead loved ones. But deep in my heart, I nurse the hope that he is alive,” said Topacio.

Like they do every year, Find members will gather at the Bantayog ng mga Desaparecidos near the Baclaran Church in Parañaque City.

Topacio, the group’s organizing and education coordinator, said they will not only offer prayers and light candles, but sing and read poems for their loved ones.

“We like to remember them as brave men and women who fought for the common good when our rights were repressed during martial rule,”said Sevilla.

Find, founded in 1985, has documented 1,837 cases of enforced disappearance from the time martial law was declared in September 1972 up to June 2012, well into the present Aquino administration.

The biggest number of cases—878—occurred during Marcos’ martial rule, followed by 614 cases during the succeeding administration of President Corazon Aquino, the mother of President Aquino.

At least 1,147 victims remain missing, while 435 had returned to their families. A total of 256 were found dead. Most of the victims were political activists.

Edcel Lagman, when he was a congressman, and the late former Sorsogon Rep. Bonifacio Gillego had pushed for a measure in the House of Representatives against enforced disappearances.

Signed by President Aquino in 2012, Republic Act No. 10353 made the Philippines the first country in Asia to have a law penalizing such a crime.

Enforced or involuntary disappearance, according to RA 10453, refers to the “arrest, detention, abduction or any other form of deprivation of liberty committed by agents of the state or by persons or groups acting with the authorization, support or acquiescence of the state, followed by a refusal to acknowledge the deprivation of liberty or by concealment of the fate or whereabouts of the disappeared person, which places such person outside the protection of the law.”

Sevilla said the government had not initiated a search for the desaparecidos so the families were pursuing the searches and criminal cases on their own.