Defense chief: US will keep adjusting to Islamic State fight 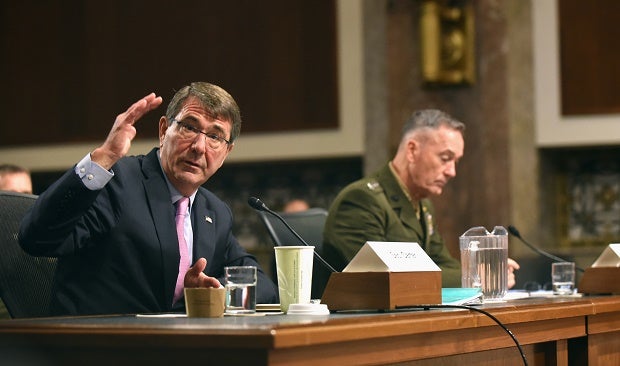 Defense Secretary Ash Carter, accompanied by Joint Chiefs Chairman Gen. Joseph Dunford, testifies on Capitol Hill in Washington, Tuesday, Oct. 27, 2015, before the Senate Armed Services Committee. Carter said Tuesday that the US is willing to step up unilateral attacks against Islamic State militants in Iraq or Syria, a signal that the US would escalate American involvement beyond airstrikes by giving the go-ahead for US special operations forces’ raids on the ground. AP

FAIRBANKS, Alaska — Defense Secretary Ash Carter said Friday the decision to send special operations forces to Syria to work with local Kurdish and Arab fighters is unlikely to be the last significant adjustment to the US fight against the resilient Islamic State group.

“We are going to continue to innovate to build up what works,” he told reporters flying with him to Fort Wainwright in Fairbanks, Alaska, on the first leg of a nine-day trip to the Asia-Pacific region.

He added that the US will soon beef up its air campaign by sending F-15 fighter planes to a Turkish air base, giving the US an opportunity to accelerate airstrikes. A senior defense official said the US will send about a dozen of the F-15s to Turkey’s Incirlik Air Base.

Asked whether the use of US special operations troops in northern Syria to coordinate with local forces was a model that would be adopted in Iraq, Carter said “we will continue to consider” this and other ways to achieve better results against the militants, who control large portions of Iraq and Syria.

Carter said the US forces in northern Syria will be in an area where Russian warplanes are not bombing, so it would not be necessary to talk to the Russians about steering clear. The US and Russia recently signed a memorandum of understanding to avoid unintended conflicts between their warplanes, which are operating separately in the skies over Syria.

Carter declined to be specific about where the US troops will operate in northern Syria but said they will be in territory controlled by Syrian Kurds.

Carter added, “Both we and the Syrian Kurds see the great value of the Syrian Arab coalition as the fact that they are Sunni Arabs and therefore have an interest in driving ISIL from Raqqa,” the militants’ declared capital. “Moreover, they’ll be the kind of force that is more likely to be accepted by the population of Raqqa, and that’s important.” Raqqa is in Arab territory south of the Kurdish area.

US officials have said the US-led coalition campaign in Syria is now focused on putting increased pressure on IS in Raqqa. That could in turn make it easier to fight IS in Iraq.

US officials said Friday that as part of the plan, the US is talking with the Iraqi government about setting up a commando task force to better target Islamic State leaders and networks.

The US is also looking at providing Iraqi forces with additional equipment and training to counter roadside bombs and vehicle-borne explosive devices.