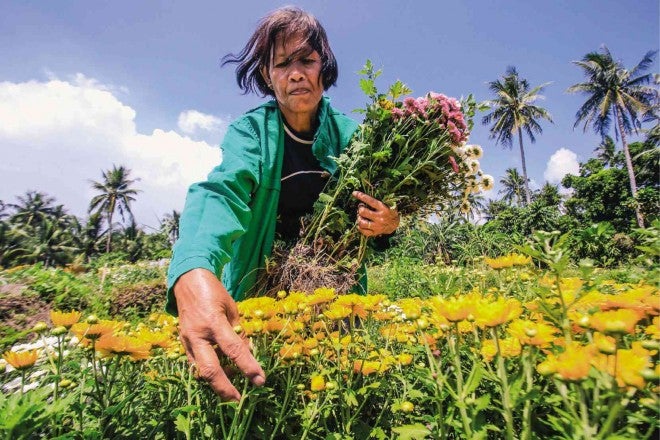 While Benguet growers ended up with blooms of diminished quality after Typhoon “Lando” (international name: Koppu) damaged their gardens, a farm at the foot of Mt. Mayon in Daraga, Albay province, offers fresh flowers that are attracting buyers from far and wide.

As early as Monday, people have been swarming all over the farm, often referred by residents as their mini version of Baguio, in Matnog village picking a variety of white, yellow, pink and orange flowers like anthurium, aster, chrysanthemum and Malaysian mums.

At least 60 people visit the place daily just to buy the fresh flowers, said Gelma Poguilla, 58, one of the farm owners.

“They prefer to buy our flowers because they can choose and pick the flowers that they want,” she said.

Each plant costs P25, with at least five to seven stems of flowers, cheaper than the bundles sold at the market.

“That’s the secret why customers flock to our sleepy barangay during All Souls’ and All Saints’ Day,” she said.

Flowers grow profusely on the farm because of the fertile land and cold climate, according to Poguilla.

At foot of Mayon

The farm is within the 6-kilometer permanent danger zone of Mayon Volcano and is about a 15-minute drive from the Daraga town proper.

Aside from getting the freshest flowers, visitors can also take pictures of themselves, with the colorful blooms as backdrop.

Marlin Llenaresas, 58, another flower farm owner, said she was thankful that Lando did not hit Bicol, sparing their farm.

“If the typhoon hit, all our sacrifices growing the flowers would have been blown by the strong winds,” she said.

Both Poguilla and Llenaresas grow flowers all-year round and bring their products to different provinces across the Bicol region.

The story is different for flower growers in Benguet.

While the province’s flower growers managed to meet the demand this year, they were forced to send out flowers of diminished quality.

“The supply would not be affected [as people flock to local markets for flowers] but the quality is definitely lower because Lando soaked the flowers [before these were harvested],” Juliet Pasi, president of Alno Cutflower Association, said in a text message on Thursday.

Lando destroyed P40-million worth of flowers grown in greenhouses and

Benguet has 5,230 cut-flower producers, who earn up to P2 million for a hectare of flowers sold per season, provincial government records showed.

Pasi said white roses and anthuriums were the preferred flowers during the holidays beginning with All Saints’ Day, but Malaysian mums are usually the best sellers.

Benguet Gov. Nestor Fongwan said mums were grown in greenhouses because these required a controlled environment. “But most greenhouses were damaged by Lando,” he said.

5 most destructive explosions of Mayon Volcano

Mayon Volcano survivor: It was like a scene from hell