5 most destructive explosions of Mayon Volcano 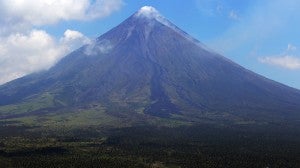 MANILA, Philippines–The Philippine Institute of Volcanology and Seismology (Phivolcs) said Wednesday it has recorded 45 volcanic earthquakes and 270 rock fall events in Mayon volcano in Albay province during the last 24 hours.

Phivolcs placed the volcano under Alert level 3, meaning that “magma is at the crater and that hazardous eruption is possible within weeks.”

On Tuesday, Albay Governor Joey Salceda ordered the evacuation of 12,000 residents, who will be affected by the imminent eruption.

Recognized worldwide for its near-perfect cone shape, the Mayon volcano has killed hundreds and buried whole towns with lava during its 400 year history. According to Phivolcs, the volcano has erupted at least 50 times from 1616 to 2006.

The Cagsawa church ruins in Albay stands as a reminder to the Mayon volcano’s most destructive explosion, which recorded 1200 casualties.

The eruption damaged Camalig, Cagsawa, Budiao, Guinobatan towns and half of Albay province.

The eruption of 1814 was described as having pyroclastic flows, volcanic lightning, and lahar.

The second most destructive explosion of the volcano was recorded between June 4 to July 23, 1897 and killed 350 people due to pyroclastic flow characterized by hot water and rocks. During its most destructive phase, the explosion lasted for 17 hours and damaged the seashore of Sto. Domingo and barrios (villages) of Sto. Nino, San Isidro, San Roque, San Antonio, Misericordia in Sto. Domingo town; Ligao town; parts of Bigaa, San Fernando; and Legazpi City. The Basud River in Sto. Domingo town and Camalig were also hit with lava flow.

The second recorded eruption in the history of the Mayon Volcano lasted for six days and killed 39 people. The explosion destroyed the whole town of Malinao and heavily damaged Cagsawa, Guinobatan, Budiao, Polangui, Ligao towns.