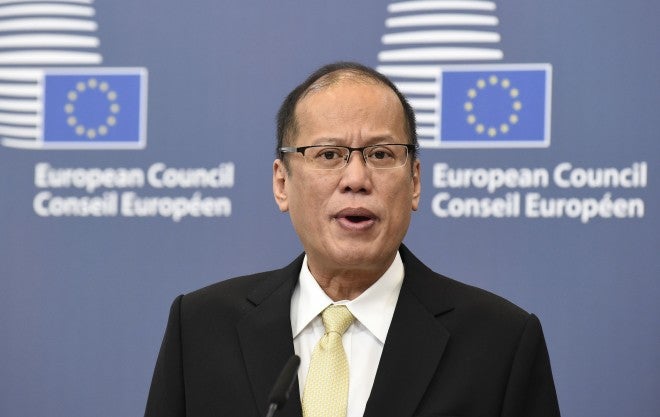 President Benigno Aquino III gives a statement after a meeting with the European Union President on September 16, 2014 at the EU headquarters in Brussels. AFP

BRUSSELS, Belgium—President Benigno Aquino III was put on the spot over his administration’s human rights record shortly after he delivered a wide-ranging policy speech organized by an independent think tank here.

Shortly after four protesters from Migrante Europe greeted his convoy at the entrance of Château of Val-Duchesse on Tuesday (Wednesday, Manila time), Aquino rejected what he called “blanket statements” detailing how “human rights violations had not stopped” since he took office four years ago.

During the open forum that followed Aquino’s speech, one participant also mentioned the government’s revised counterinsurgency program, Oplan Bayanihan, saying it appeared to “endanger” the lives of some of his own people.

“Well, those are blanket statements and we don’t necessarily agree with them,” he told his audience in a forum organized by the Egmont Institute.

“It is not our policy to encourage or even abet any transgressions of the law.  And towards that end, we have been investigating all of these allegations,” he added, citing also the arrest of former Major Gen. Jovito Palparan, who is facing criminal charges over the disappearance of two student activists.

“We have adopted a policy that their only deterrence to crime is the certainty of punishment.”

Aquino acknowledged that the Philippine justice system was slow, but vowed that the government was “trying to do our utmost to advance the solution of all of these crimes.”

“But we do have to work with the tools that we have on hand,” he said.

“We have an adversarial system of justice and it takes such a long time to be able to present the personal circumstances to accuse each one of a specific action and wheels of justice would hopefully move faster than what they are doing now.”

The President cited the task force created to go after those behind extrajudicial killings “with the end in view of arresting every culprit regardless of whether it was a media individual, an activist, or any other individual.”

“We have adopted a policy that their only deterrence to crime is the certainty of punishment,” he said.

Of 54 cases of media killings, some of which happened prior to his term, he said there had been 10 cases of conviction.

The President also maintained that not all cases of so-called “media killings” were related to the job.

“For instance, in the media killings, some who used to work in media died. Did they die because they were investigative journalists? Were they exercising their profession in a responsible manner, living up to journalistic ethics? Or did they perish because of other reasons?” he said.