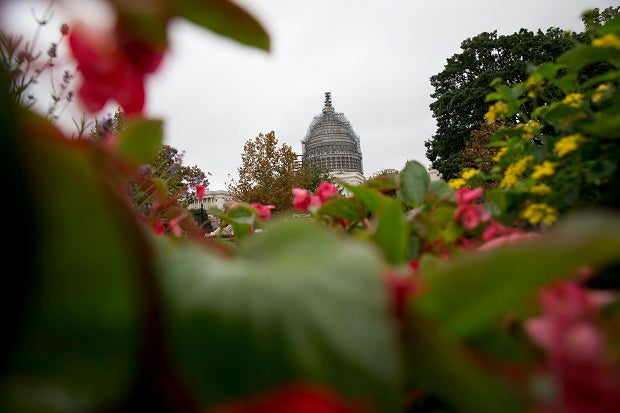 The Capitol Dome, covered with scaffolding, is seen though flowers on Capitol Hill in Washington, Wednesday, Sept. 30, 2015. AP Photo

WASHINGTON, United States—The US House of Representatives on Wednesday passed a bipartisan, two-year budget deal that boosts federal spending by $80 billion, reduces a government shutdown threat and raises the debt ceiling through the end of Barack Obama’s presidency.

Nearly 80 Republicans joined a united front of Democrats in favor of the legislation, which passed 266 to 167.

The deal is the result of weeks of secret negotiations between the White House and outgoing House Speaker John Boehner, who has stated his desire to clear the decks of any fiscal crises before his successor takes the gavel.

Congress must raise the federal borrowing limit by November 3, or risk Washington ending up in default.

The bill now goes to the Senate where it is expected to pass, effectively bringing to a close a series of fiscal fights as the two parties gear up for the 2016 presidential race.

Republican and Democratic lawmakers fought several battles over borrowings between 2011 and 2014 that roiled financial markets, caused an unprecedented downgrade of the country’s triple-A debt rating by Standard & Poor’s, and forced a partial government shutdown for 16 days in 2013.

“This agreement is by no means perfect, but on balance it’s a good agreement for our troops, for taxpayers, and for the American people,” Boehner said in a statement.

The legislation raises federal spending caps by some $80 billion until September 30, 2017, with funding split between domestic programs and the military.

Another roughly $31 billion in “contingency operations” funding would go to the Pentagon, offset by tweaks to entitlement programs including Social Security.

Several conservative Republicans opposed the deal over the way it was negotiated in secret, but also because it failed to reduce the $18 trillion deficit.

“Instead of passing this bill, which pushes us in the wrong direction by increasing spending and raising the debt limit, we should have answered the call of the American people to reduce the national debt and balance our budget,” House Republican Gary Palmer said.

In a sign of how Washington’s federal spending habits and its huge deficit will continue to flare up as issues in the presidential race, several of the Republican White House hopefuls including Senator Marco Rubio and Senator Ted Cruz expressed their opposition.

Cruz blasted it as “complete and utter surrender,” while Senator Rand Paul insisted to The Hill that he would try to do “everything I can to stop it.”

The deal is one of Boehner’s final accomplishments. Republicans on Wednesday elected Paul Ryan as their candidate to be the next speaker of the House, and a final floor vote is set for Thursday.

Ryan said in a statement ahead of the speaker vote that while he disapproved of the closed-door dealings that yielded the agreement, he would ultimately support it.

“As with any budget agreement, this one has some good, some bad, and some ugly,” he said.

“What has been produced will go a long way toward relieving the uncertainty hanging over us, and that’s why I intend to support it.”