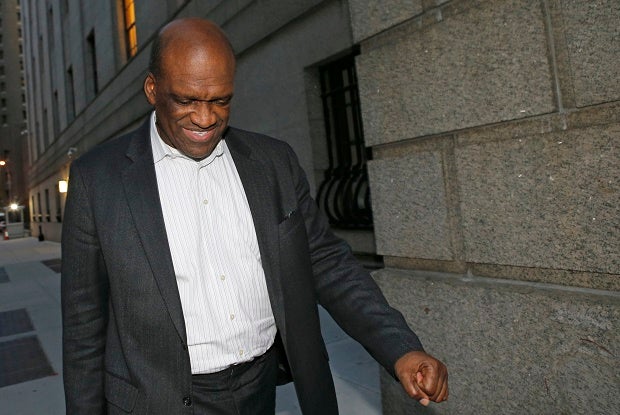 John Ashe, a former president of the United Nations General Assembly facing tax charges in a bribery case, leaves federal court, Monday, Oct. 26, 2015, in New York. Ashe was freed Monday after an electronic bracelet was attached and the last of four co-signers to his $1 million bail package were approved. AP Photo

NEW YORK, United States—A former president of the United Nations General Assembly facing tax charges in a bribery case was released Monday on $1 million bail even as a prosecutor said it was likely he will face additional charges.

READ: 5 not-guilty pleas and bail for a billionaire in UN case

John Ashe, 61, was freed at dusk after an electronic bracelet was attached and the last of four co-signers to his bail package was approved. He declined to comment as he left Manhattan federal court.

Earlier in the day, Assistant U.S. Attorney Janis Echenberg told Judge Vernon S. Broderick that prosecutors were “rather likely” to bring additional charges against Ashe, a former U.N. ambassador from Antigua and Barbuda who served for a year in the largely ceremonial role of U.N. General Assembly president until September 2014. So far, he faces only tax counts that carry a maximum penalty of six years in prison.

The U.S. government claims Ashe, of Dobbs Ferry, New York, was at the center of a bribery conspiracy from 2011 through 2014 in which Chinese billionaire Ng Lap Seng and other businesspeople paid him over $1 million in bribes to support a multibillion-dollar U.N.-sponsored conference center that Ng hoped to build as his legacy in Macau, where he lived.

Also charged in the case was Francis Lorenzo, a deputy U.N. ambassador from the Dominican Republic. Prosecutors said Lorenzo was paid tens of thousands of dollars a month by Ng’s organizations to support the Macau project.

Lorenzo, 48, and Ng, 67, also were freed on bail Monday. Lorenzo, who has been suspended from his diplomatic post, met the conditions of a $2 million bail package while Ng was released after posting $25 million of his $50 million bail and agreeing to pay for two private security guards around-the-clock at a Manhattan apartment to ensure he does not flee.

Lawyers for all three men have said they are fighting the charges and will be vindicated. Lawyers for Ashe and Lorenzo also say it is likely they will make immunity claims in the case.