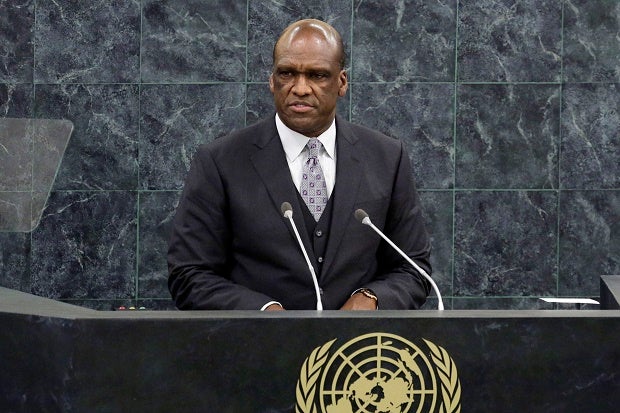 NEW YORK — A former president of the UN General Assembly, another diplomat and a Chinese billionaire were among five defendants who pleaded not guilty Thursday in a bribery case that has invited scrutiny of the world body’s operations.

The pleas in Manhattan federal court came as each defendant stood in a jury box, their hands handcuffed in front of them. Afterward, a judge refused the government’s attempt to revoke $50 million bail for Ng Lap Seng, the wealthy man whose money is at the center of the bribery scandal.

Prosecutors say Ng funneled over $1 million in bribes to John Ashe, 61, a former UN ambassador from Antigua and Barbuda who served as president of the General Assembly for one year until a year ago. They say Ng was seeking to influence Ashe, who faces tax charges, to pressure other diplomats into supporting a major UN conference center in Macau, where Ng lives.

Bribery and money laundering charges have been lodged against Ng and Francis Lorenzo, a suspended ambassador to the United Nations from the Dominican Republic. Lawyers for the men have promised a vigorous defense.

After the pleas were entered Thursday, US District Judge Vernon S. Broderick rejected Assistant US Attorney Daniel Richenthal’s request to revoke bail for Ng that had been set by a magistrate judge last week.

Broderick did, however, toughen conditions under which Ng can remain in a Manhattan apartment under guard. He’s limiting who Ng sees, how he communicates by phone and computer and is requiring him to provide information to the US government about his fleet of private aircraft.

Richenthal had argued that Ng has every reason to flee and the money and connections to do so, despite an arrangement that will keep two guards at his midtown Manhattan apartment around-the-clock.

“The risk of flight is severe,” the prosecutor said, calling Ng “wildly wealthy.”

“Right now, all they’ve got is he’s rich and the rest is speculation,” Brafman said.

The lawyer said his client was prepared to post $20 million in cash and a $4 million apartment to secure his bail.

Ban ‘shocked’ by bribery claims against ex-president of UN assembly