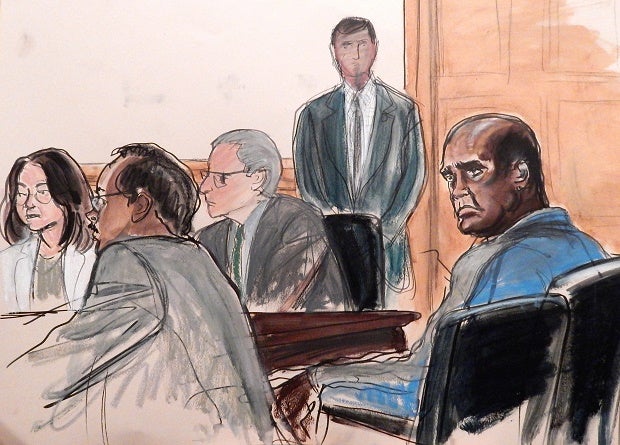 In this courtroom sketch, defendant John Ashe, right, sits in court during his arraignment on bribery charges in New York, Tuesday, Oct. 6, 2015. The former president of the United Nations General Assembly turned the world body into a “platform for profit” by accepting over $1 million in bribes from a billionaire Chinese real estate mogul and other businesspeople to pave the way for lucrative investments, a prosecutor charged Tuesday. Seated from left are co-defendant Sheri Yan, defense attorney Robert Van Lierop and defense attorney Mark Kirsch. AP

NEW YORK — Over a prosecutor’s objections, bail conditions were set Friday for a Chinese billionaire at the center of a bribery case that has drawn scrutiny into the operations of the United Nations.

US Magistrate Judge Kevin Nathaniel Fox said Ng Lap Seng can be released on $50 million bail, including $20 million cash and a $4 million luxury Manhattan apartment where he will remain until trial under 24-hour guard.

Fox said the 67-year-old Ng must wear an electronic bracelet and pay the $200-an-hour cost of two private security guards who will ensure he reports to court as required.

Ng was charged over a week ago in a bribery conspiracy with five others, including a former president of the UN General Assembly and a Dominican Republic diplomat. Prosecutors said Ng provided much of over $1 million in bribes that John Ashe, a former UN ambassador from Antigua and Barbuda, was accused of accepting in return for promoting a UN conference center in Macau. Ashe’s defense lawyer has said his client will be vindicated.

UN Secretary General Ban Ki-moon has said through a spokesman that charges which “go to the heart and integrity of the UN” left him “deeply troubled.”

When US Attorney Preet Bharara announced them, he said additional arrests would not be surprising and his investigators will be asking, “Is bribery business as usual at the UN?”

Christine Chung, a defense lawyer who also won a bail package for her client Friday, hinted one direction defense lawyers might turn when she said people should be asking, “Why isn’t it more clear to people what is and isn’t permissible at the UN?”

Assistant US Attorney Daniel Richenthal portrayed Ng on Friday as an unscrupulous businessman who posed an enormous danger to flee because of nearly $2 billion in wealth and powerful connections worldwide.

“This case is imminently defensible because the government has again and again jumped to conclusions,” he said.

Brafman said hundreds of UN officials had supported the project in Macau, where Ng lives and works from 10 offices.

The lawyer said Ng “wants to clear his name,” in part to protect his real estate empire, which he predicted would “crumble in an hour” if banks demanded payments of loans after a conviction. That possibility, Brafman added, would cause Ng to “lose everything.”

References to Ponzi king Bernard Madoff, serving a 150-year prison sentence, occurred several times because Madoff was permitted to await trial in 2009 in his posh Manhattan apartment after agreeing to pay for 24-hour guards.

Richenthal complained Ng would create his own private prison in a four-bedroom luxury apartment that the government maintains was used illegally in the bribe scheme.

Madoff never made it to trial, pleading guilty to fraud charges instead.

Ban ‘shocked’ by bribery claims against ex-president of UN assembly