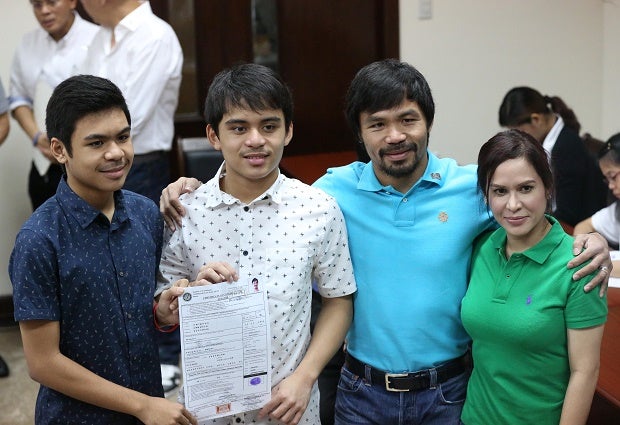 Boxing champion Manny Pacquiao and his wife Jinkee accused the Bureau of Internal Revenue (BIR) of resorting to “fishing expedition” to pin him for P3-billion tax evasion.

In his 75-page memorandum, he urged the high court to order the BIR to stop the implementation of the warrant of distraint and levy and garnishment order on his assets to cover for his tax liability.

He also urged the high court to reverse the Court of Tax Appeals (CTA) order requiring him to deposit P3.2-billion cash bond or P4.9-billion surety bond as a condition to suspend tax collection against them.

Pacquiao told the high court that their right to due process have been violated when the BIR proceeded with the tax collection process even without serving a Final Decision on Disputed Assessment (FDDA) against them.

The memoranda added that the CTA acted with grave abuse of discretion when it required them to post a bond despite the BIR’s violation.

“Respondent Commissioner’s (Kim Henares) failure to validly and completely assess petitioners–Pacquiao couple—[given the absence of an FDDA], a mandatory pre-requisite for collection, clearly deprives her of authority to collect against petitioners and make all actions taken pursuant to the collection efforts of respondent Commissioner and her representatives null and void and no effect whatsoever,” the memoranda stated.

Pacquiao, through lawyer Jayson Fernandez added that Henares violated the requirements for summary tax collection remedies when she started tax collection before the expiration of the period for the Pacquiao couple to pay the assessed deficiency taxes.

They added that BIR also failed to provide them copies of the garnishment order.

The BIR, in its letter of authority (LOA), informed the Pacquiao couple that fraud was established in their tax payment.

But Pacquiao through counsel told the high court that the BIR has yet to present proof that they committed fraud in the payment of taxes from 1995 to 2009.

“Petitioners have been made hapless subjects of a ruthless name and shame campaign designed to strike fear in the hearts of our citizenry in the hope that they will voluntarily pay more taxes than what is rightfully due, or risk the vengeful ire of the tax collector,” Pacquiao’s memorandum to the high court said.

According to the BIR, Manny’s tax liability is over P2 billion. The boxing champion has P1.185-billion net in his statement of assets, liabilities and net worth.

Last year, the high court issued a restraining order on the CTA resolution that directed the Pacquiaos to post a cash bond worth P3.29 billion or a surety bond in the amount of P4.94 billion.

The bond is needed to prevent the BIR from collecting the couple’s alleged tax deficiency worth P3.29 billion for years 2008 and 2009.

In their petition, the Pacquiaos hit the tax court in presuming the correctness of the BIR’s tax fraud assessment without hard proof and for requiring them to post a bond even if the tax collection processes employed by the BIR allegedly violated the law.

They also saw the bond requirement as a hindrance to seeking justice from the “arbitrary and bloated assessments” issued by the tax bureau.

“The premature seizure and liquidation of all of the properties of petitioners on account of respondent (BIR) Commissioner’s premature tax collection efforts will not only destroy them financially…but, moreover, will forever tarnish their reputations beyond repair, even in the absence of a judicial determination rendered after the trial on the merits of the case,” the petition read.

Pacquiao had said he already paid $8.35 million in taxes from his fight purses in 2008 and 2009, citing documents from the United States Internal Revenue Service (IRS).

The eight-division champion’s original tax liability was P2.26 billion but it went up to P3.29 billion due to surcharges and penalties. CDG