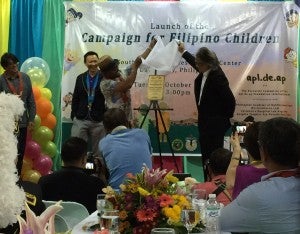 DAVAO CITY, Philippines – “I am Apl de Ap and I am blind,” said the Filipino-American rapper of the Grammy Award-winning Black-Eyed Peas, as he turned over a retinal camera to the Southern Philippines Medical Center (SPMC) here.

A retinal camera is a medical equipment that is seen to boost the hospital’s capacity to diagnose Retinopathy of Prematurity (ROP).  ROP is an eye condition which, if untreated within 48 hours, can cause blindness among newborn infants.

“I am legally blind that’s why this campaign is very close to my heart,” said Apl de Ap, spelled out Allan Pineda Lindo from Angeles, Pampanga, who in recent years had set up the “Apl de Ap Foundation” to embark upon giving education aid and addressing health care needs of Filipino children who could not afford the services.

Stricken by an eye condition called nystagmus, Pineda who grew up impoverished under the care of his single mother, recalled the hard life of being visually impaired.

“I had difficulties going to school,” said Pineda. 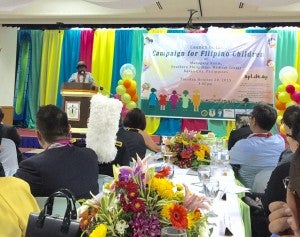 Apl.de.ap speaking at the Campaign for Filipino Children press conference.

“I couldn’t excel as much as I wanted to because I couldn’t read the blackboard. I had to copy the notes from my classmates, and I always had to play catch up, “Anong nakasulat sa blackboard (what is being written on the board)?” he recalled.

Nystagmus is an eye condition, which causes involuntary movement of the eye that at times result in reduced or limited vision.

The Pampanga-born rapper recalled his life in the Philippines when he had to accompany his grandfather to harvest sugarcane or to plant camote in the farm, before he was sponsored to go to the US at age 14, and later gained fame as part of the Black-Eyed Peas.

“It was already hard enough growing up in the Philippines but imagine being blind, that’s 10 times harder,” he said. “That’s why, this is important for me because I want all the children in the Philippines to have equal opportunity in life, to pursue their dreams.”

The retinal camera, which is the first of its kind in Mindanao, is the first of the five cameras that the Apl de Ap Foundation plans to turn over to five regional hospital partners for the early detection of ROP, noted as one of the leading causes of blindness among premature children.

Launched two years ago, Apl de Ap’s Campaign for Filipino Children seeks to generate support not only for medical care but also for the education needs of children, building at least 30 schools in the different parts of the country, including ones in Zamboanga City, and the Typhoon Haiyan (Yolanda)-ravaged Tacloban. It has also built music labs in the north.

“I was one of those children, I came from a humble beginning, and was given enough opportunity,” Pineda said.

“I was sponsored to go to the US and became a Black Eyed Peas, and now I’m paying it forward and helping other children like me,” he said.

At risk for ROP are newborn infants with birth weight of less than 1,500 grams, and a gestation age of 32 weeks, according to Dr. Nicolo Paderna, a pediatric ophthalmologist at SPMC.

The Philippine Academy of Ophthalmologists (PAO) has chosen to turn over the equipment to the SPMC because of its capability to reach out to indigent patients in Mindanao.

“We looked at the data from all the prospective hospital partners, and realized the SPMC has a good residency training program for ophthalmology,” said Dr. Pearl Villalon, chair of the PAO.

“The assessment of your program is tops and good,” she said, “We also have several faculty on the ground to help the residents through the process of screening, so, that is the reason why we chose.”

The PAO is also eyeing regional hospitals in Western Visayas, Pampanga, and one in the Ilocos region for expansion outside of the National Capital Region.

According to Dr. Josephine Cadayona, head of the SPMC Ophthalmology Department, SPMC and its extension hospital in Tagum, currently has 13 resident doctors who will all be training for ROP screening.

“It will surely go a long way for our indigent pediatric patients,” Cadayona said.

Physicians say caring for a blind child is emotionally taxing and financially draining.  Indigent families can hardly cope with the requirements and it is advisable to prevent the onset of ROP>

They laud Pineda for helping raise the awareness of people about ROP.

“It is very important for me to give forward in helping out every Filipino,” said Pineda.  SFM