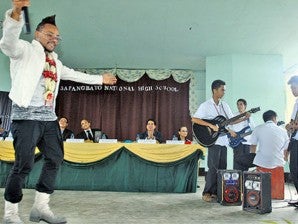 RETURN OF THE NATIVE. Allan Pineda Lindo, aka apl.de.ap of the Black Eyed Peas, jams with the Sapangbato High School band during his visit to his hometown in Angeles City on Wednesday. The international rap star donated top-of-the line computers, books on stories behind the songs of the greats in pop music here and abroad, a music studio and library to his old school, where he finished elementary. JIM GUIAO PUNZALAN

Apl (Allan Pineda Lindo)—whose American serviceman father left his Filipino mother shortly after his birth—went to high school at HAU in Pampanga province. He was a scholar of the Pearl S. Buck Foundation, an organization that finds healthier living environments for abandoned or orphaned Amerasian children, until his junior year—when his adoption papers were finalized, allowing him to go to the United States.

Meanwhile, 18 more desktop PCs and loads of other books were delivered to the computer room and library, respectively, of Sapangbato National High School (SNHS), also in Angeles, where apl finished elementary.

Apl was visibly delighted as he watched the students trying out the facilities, which were named after him, during inaugural ceremonies held at the two schools on Tuesday.

All the computers were flown in from the United States, sponsored by Hewlett-Packard (HP). The books were acquired in partnership with the Filipinas Heritage Library of the Ayala Foundation. Apl funded the construction of the music studio, computer room and libraries.

The 36-year-old member of the Grammy-winning hip hop group Black Eyed Peas has also opened an endowment fund that would send some of the Top 15 graduating students of SNHS to HAU. The scholarship comes with free uniforms.

The studio, while open to HAU students, would likewise be available for the use of poor but deserving, musically inclined children.

A student was asked to test the recording equipment, singing Bruno Mars’ “The Lazy Song” with backing tracks while apl sat behind the mixing board. The kid was all smiles as he listened to the playback; apl nodded in approval.

Mateo recalled how HP thought of sponsoring the computers: “Black Eyed Peas manager Polo Molina went to the HP head office in the US because apl initially wanted to buy the computers directly. When told of the purpose, HP entered in a partnership and gave the computers for free.”

On Tuesday, Molina was with apl’s entourage, along with DJ Joker, one of the Filipino talents signed to apl’s Jeepney Music label.

At the program for the opening of the computer room and library in SNHS, a band composed of students performed Taylor Swift’s “Fearless.”

In his inspirational message, apl recounted that, once upon a time, he was just like the kids of Sapangbato, running around, “namamastol (taking carabaos to pasture)…”

He issued a challenge to the children: “I want Sapangbato kids to be as competitive as the others. Take advantage of the school’s new facilities, use the computers.”

Angeles City Mayor Edgardo Pamintuan arrived with pleasant news. He said that honor students from SNHS now worked in his staff. He also expressed “profound gratitude” that a native son like apl has returned: “You haven’t forgotten where you came from.”

Apl, in turn, said he was “proud of our people, our history, our culture … how we support each other, which I don’t see in other countries. It makes me feel glad to be home, grounded and in touch with my roots.”

A former schoolmate, Rowena Niez, told the Inquirer that apl had made it a point to come home to Sapangbato every Christmas. “He gives money to the Aetas. He also financed the repair of the roof of our parish Church. He’s kind, not arrogant.”

At the program, the emcee asked apl to sing. Apparently caught by surprise but nonetheless game enough, apl chose not to use a minus-one disc and instead asked the school band to jam with him.

As he sang the opening verses of “The Apl Song,” the band members looked nervous and missed a beat, but somehow completed their impromptu number.

They would probably have a hard time sleeping in the next few days, high on the experience of having played with one of the world’s most popular rappers.

Asked to recall his school days, apl said: “I was pretty good … I loved going to school … When I was adopted by my foster father (Joe Ben Hudgens) my main aim was to excel in academics. But then I stumbled into music.”

Has he ever attempted to get in touch with his biological father? “Not yet,” apl said.

Asked if he knows his father’s name, apl said rather coldly: “I think it’s Robert Yelder.”

But he warmed up when the Inquirer asked about Hudgens, whom he referred to as “my dad.” Apl said, “Of course, I owe it all to him. We’re really close. We have dinner whenever there’s a chance.”

He also revealed that Black Eyed Peas, on tour till November, would return to Manila (after its debut concert here five years ago) for a show on Oct. 22.

Apl’s advocacy work, which is focused on education, is for the long haul. “The Sapangbato computer lab will serve as the model … I plan to expand to other regions in the country and keep building computer labs.”

His advice to students: “Keep on dreaming …” With a report from Tonette Orejas, Inquirer Central Luzon