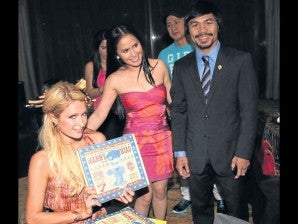 PARIS MEETS PACMAN. American hotel heiress Paris Hilton looks pleased as she opens the presents brought by world boxing champion and Congressman Manny “Pacman” Pacquiao and his wife Jinkee in Makati on Tuesday. “How cute is this little Manny Pacquiao doll they gave me,” Hilton says in a tweet. PHOTO FROM HILTON’S TWITTER PAGE

After the photo-shoots, the product pitch, and the partying, The Heiress is almost done.

Reality TV show star and businesswoman Paris Hilton met the media on Wednesday to do one more bit for her host company, after charming her way into the hearts of Filipino fans and friends that included “The Pacman” the previous night.

“If I lived in the Philippines, I would definitely live in Azure. The beach club is gonna be very Paris—sexy, fun, exciting, beautiful. Of course, there’s going to be pink there, it’s my favorite color,” she told reporters.

She was referring to Azure Beach Club, a residential community being developed by Century Properties in Paranaque City. The firm has asked Hilton to help design the project.

Hilton said “real estate is something I want to be involved in. I’ve done it all—books, movies, acting—but this project is the one I’m most proud about.”

“My grandfather built the Hilton Hotel chain and created his legacy. I am doing the same now. He called me two days ago when he heard I was going to the Philippines and told me how proud he was of me. I really look up to him as a businessman,” she added.

Hilton also had the chance to meet her fans at the press conference, including Isha Dinio who considered herself Hilton’s No. 1 fan in Manila.

Dinio shed tears as she and her idol hugged and exchanged presents. Hilton gave her a bag.

On Tuesday night, Hilton graced a dinner party held in her honor by world boxing champ and Sarangani Rep. Manny Pacquiao and his wife Jinkee.

Among those invited were the surgeon-to-the-stars, Dr. Vicky Belo, and her daughter Cristalle. Belo said she found Hilton “really charming and friendly and nice. First thing she said to me was, ‘I love your perfume.’”

“I told her I heard she had a very successful fragrance line and she was so happy to tell me that she was already launching her 12th fragrance,” Belo said.

Hilton later tweeted about the dinner party held at Makati Shangri-La’s Pasay function room: “Just got home from dinner with Manny and Jinkee Pacquiao. Had the best time! Loved hanging out with them and all their amazing friends.”

She also posted about the Manny Pacquiao doll that the couple gave her.

“I’ve been having a wonderful time. Everyone’s so welcoming and wonderful,” Hilton said.

Hilton is expected to be at SM Megamall at 4 p.m. today for the opening of her handbag store and for a meet-and-greet session with fans.

She is scheduled to leave Manila on a flight to Los Angeles tonight.

“I love the Philippines, I couldn’t wait to come back,” Hilton said.