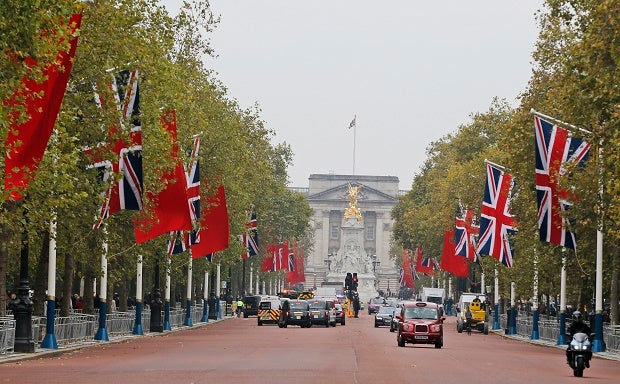 China flags are fixed on poles beside Union flags along The Mall towards Buckingham Palace in London, Friday, Oct. 16, 2015. London is preparing for the visit of Chinese President Xi Jinping, accompanied by his wife Peng Liyuan starting on Monday Oct. 19, 2015. AP Photo

LONDON—Chinese President Xi Jinping arrived in Britain Monday for a four-day state visit as part of a push to increase trade ties between the two countries.

Xi and his wife Peng Liyuan will spend several nights at Buckingham Palace, hosted by Queen Elizabeth II and Prince Philip, after an elaborate formal welcome and a carriage ride to the palace Tuesday.

“It’s a real opportunity to deepen our relationship and I’m delighted President Xi is spending so much time here,” Cameron said, adding that Chinese investment in major British infrastructure projects is generating jobs in Britain.

Cameron will spend time with Xi both at 10 Downing Street and at the prime minister’s country retreat, Chequers.

The elaborately choreographed visit will also include a trip to the Manchester City football training grounds and a possible unscripted side trip to a pub to dine on that English classic, fish and chips.

The Chinese president plans to address both houses of Parliament on Tuesday before a state banquet at the palace likely to be attended by senior royals, politicians and some figures from the entertainment field.

Protests over China’s human rights record are expected throughout Xi’s visit, which is scheduled to end Friday.

British opposition leader Jeremy Corbyn has indicated a desire to discuss human rights with Xi when they meet at a palace banquet, but Chinese officials say they would be surprised if he raises the issue.

Prominent Chinese dissident Ai Weiwei, a frequent critic of Chinese policies, is having a major exhibit of his works close to the palace at the Royal Academy of Arts.

The two governments are already cooperating on nuclear power development, with China making a major investment in a new plant in southeast England.

Prince William, who recently made an official visit to China, recorded a speech for broadcast on Chinese TV outlining the need to combat illegal wildlife trade.

He referred to his daughter Princess Charlotte when he warned that children born this year, like her, “will see the last wild elephants and rhinos die before their 25th birthdays” unless urgent steps are taken.

“We have a responsibility to act on the facts we have today,” William said.