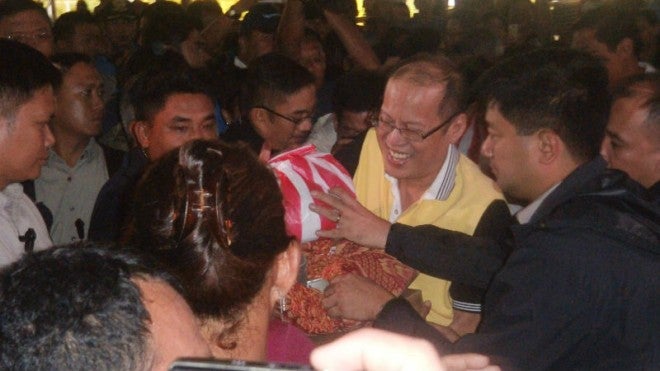 2015President Aquino hands over relief packs, consisting food and non-food items, to evacuees at the gymnasium of Nueva Ecija High School who are among the over 7,000 displaced by the flash flood brought by Typhoon Lando in Nueva Ecija. He was with Gov. Aurelio Umali and Cabanatuan City mayor Julius Cesar Vergara. PHOTO BY ARMAND GALANG

CABANATUAN CITY—President Aquino on Monday asked residents in provinces on the path of Typhoon “Lando” (international name: Koppu) not to be complacent and heed all warnings of flash floods.

The President, who led the distribution of relief goods to 204 families evacuated at Nueva Ecija National High School here, said about 800 villages in several provinces were susceptible to runoff from northern mountain ranges accumulated during weeklong rains spawned by the typhoon.

“Now, the challenge with a lot of our countrymen is that, they don’t seem to see the amount of rain it is pouring, they think it is safe already to go back to their communities but we are preventing them right now because the expectations from tonight and after tomorrow, are a lot of this rainfall that fell on the northern portion of Luzon will be coming down and will be affecting all of these barangays near the major river systems,” he told reporters here.

Mr. Aquino said government agencies were still collating data related to the damage wrought by the typhoon, noting that communication services and electricity supply have yet to be restored in many areas in northern and central Luzon.

“But there are less and less areas that are somewhat isolated. Cabanatuan, in fact, was part of the list of those isolated, that’s why we are here,” he said.

“The challenge here is that you have a lingering typhoon as opposed to just crossing our landmass in a matter of a few hours. The expectations for the effects of this particular typhoon are about three days long,” he added.

Mr. Aquino assured that personnel of various electric cooperatives in typhoon-hit areas are checking their transmission lines to ensure that these are safe by the time these are reenergized.

He said the typhoon had not left the Luzon landmass and had veered northeast, threatening provinces in the Ilocos and Cordillera regions.

“That’s what we are trying to gear up for. And of course, we want to prevent any spread of a disease, leptospirosis is considered a threat especially the way through the floodwaters,” he said.

“Again, we will not take any chance and we will try to ensure that we are on the side of being conservative and making sure that everybody is protected during this time,” the President said.